The forearm lies between the knee and the ankle joints, the crus. It consists of many muscles, including the flexors and extensors of the digits, a flexor of the elbow (brachioradialis), and pronators and supinators that turn the hand to face down or upwards, It contains the radius, and the ulna, forming the radioulnar joint.

The ulna is a long bong, placed at the medial side of the forearm, parallel with the radius. It is divided into a shaft and ends.

The Olecranon (olecranon process): Its superior surface is of quadrilateral form, marked behind by a rough impression for the insertion of the Triceps brachii. Its anterior surface is smooth, concave, and forms the upper part of the trochlear notch. 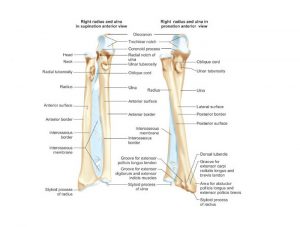 The coronoid process is a triangular eminence projecting forward from the upper & anterior part of the ulna. Its anterior surface is marked by a rough impression (the tuberosity of the ulna). which gives insertion to the Brachialis muscle, and the lateral surface presents a narrow, oblong, articular depression, the radial notch.

Trochlear notch is a large depression, It is formed by the olecranon and the coronoid process and serving for the articulation with the trochlea of the humerus. The radial notch receives the circumferential articular surface of the head of the radius, it is a narrow, oblong, articular depression on the lateral side of the coronoid process.

The supinator fossa is a triangular fossa below the radial notch. Its posterior border is called the supinator crest. The shaft has three borders and three surfaces.

The lower end contains the head & styloid process. The head articulates with an ulnar notch of the radius in the inferior radioulnar joint. The head is separated from the wrist joint by the articular disc. There is a groove between the head and styloid process posteriorly for the tendon of extensor carpi ulnaris.

It is situated on the lateral side of the ulna. Its upper end is small. disc-like and it forms only a small part of the elbow-joint, but its lower end is large and it forms the chief part of the wrist-joint. It has a shaft and two ends.

The lower end is large, of quadrilateral form, and provided with two articular surfaces: one below, for the carpus, and another at the medial side, for the ulna.

The skeleton of the hand

The skeleton of the hand is subdivided into three segments: the carpus, the metacarpus, and the phalanges.

The carpus: Eight carpal bones made up of two rows. Each raw is formed of four bones.

The pisiform is regarded as a sesamoid bone embedded in the tendon of the flexor carpi ulnaris. The scaphoid bone is the largest bone of the proximal row. It is the most commonly fractured bone in the carpus.

Blood vessels of forearm & hand, Veins and Lymphatics of the upper limb