Animals obtain their requirements of energy in the form of food, after its digestion, the soluble food substances are absorbed, but still remains the problem of their transport and distribution to the various tissues laying far away from the surface of absorption.

In small animals ( Protozoa and Hydra ): Both gases & food substances are transported by diffusion, In bigger and more complicated animals: Diffusion is not sufficient for the transportation of food & oxygen to the various tissues, Therefore, the presence of a specialized transport system is essential in these animals.

The process of transport takes place in the human body through two systems which are closely connected with each other, these systems are Blood vascular system ( Circulatory system ) and Lymphatic system. 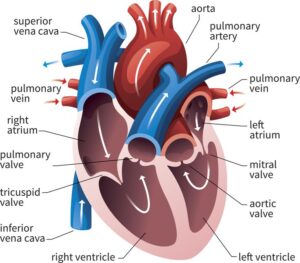 The heart is a hollow muscular organ which lies nearly in the middle of the chest cavity , It is enclosed in the pericardium, to protect the heart and facilitate its action, The heart beats regularly throughout the whole lifetime.

The heart is divided horizontally into four chambers: The upper two thin-walled chambers are called atria which receive the blood from the veins, The lower chambers with thick muscular walls are called ventricles that pump the blood through the arteries.

The heart is divided longitudinally into two sides by means of muscular walls which are right side and left side, Each side has an atrium and a ventricle connected together by an opening which is guarded by a valve with thin flaps whose free edges are attracted by tendons to the ventricle wall, to prevent the flaps from turning inside out, Thus, the blood is permitted to flow from the atrium to the ventricle, but not in the reverse direction.

It is a specialized bundle of thin cardiac muscular fibers that is buried in the right atrial wall near the connection between the right atrium ( auricle ) and the large veins , It is considered as the pacemaker of heart , as it beats at a regular rate of 70 beats/minute ( normal rate ) .

Atrio-ventricular node is located at the junction between atria and ventricles, Mechanism of heartbeats :

We can distinguish two sounds of heartbeats :

In the normal age of man, the heartbeats by a range of 70 beats/minute and pumps 5 liters of blood in each minute which is equal the total amount of blood in the body.

They include arteries , veins, and blood capillaries.

They are vessels that carry the blood from the heart to the other body organs , They are usually buried among the body muscles, All of them carry oxygenated blood , except the pulmonary artery which comes out from the right ventricle to the lungs carrying deoxygenated blood .

The wall of an artery is built up essentially of three layers of tissues, which are :

They are vessels that carry blood from all the body parts to the heart, They carry deoxygenated blood, except the pulmonary veins which open into the left atrium (autricle) carrying oxygenated blood.

A number of veins posses a system of internal valves along their length to prevent the back-flow of blood, allowing only the passage of blood in the direction of the heart.

They are tiny microscope vessels that connect the arterioles with the venules, This fact was discovered by the Italian scientist Malpighi at the end of the 17th century, and thus completed the work of Harvey.

Capillaries spread in the spaces between cells all over the body tissues because they reach all the cells and supply them with their requirements of food and oxygen.

The wall is About 0.01 micron (0.00001 mm) thick, which facilitates the quick exchange of substances between the blood and tissue cells, It consists of one row of thin epithelial cells with tiny pores between them, The diameter is the average diameter of (7 – 10 micron).