Cardiac reserve is the difference between the cardiac output in a maximum activity and the output under basal condition. This can be achieved by increased coronary blood flow, & increased coefficient of oxygen utilization (oxygen extraction ratio) by the myocardial cells to the extent that during severe muscular exercise the coronary venous blood may be deprived from its oxygen.

There is a heart rate reserve of about 125 beats/min (the heart rate can increase from a resting value of 75 beats/min to up to 200 beats/min during severe muscular exercise). This is due to:

Maximum heart rate during exercise decreases with age. It is about 200 in children and 195 or less in adults. In elderly, the rise in heart rate is even smaller. The limitation in increased heart rate is that it may increase too much to the extent that it may shorten the diastolic time and interfere with the cardiac filling. Therefore, the stroke volume is decreased. The decreased diastolic time also affects the coronary circulation, which perfuses the heart mainly during diastole. 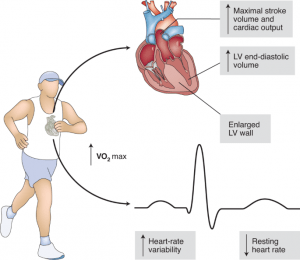 The stroke volume can be increased in muscular exercise through different mechanisms:

The limitation of the cardiac dilation: if it increases so much It may decrease the force of contraction. In non-athletes, the observed increase in cardiac output during muscular exercise depends in the first place on the increased heart rate, and to a much lesser extent on the limited increase in the stroke volume.

3. Hypertrophy of the cardiac muscle

Hypertrophy of the cardiac muscle occurs when the heart is exposed to a sustained and prolonged load. It occurs by increased size of the ventricular muscle cells.

Physiological cardiac hypertrophy is accompanied by cardiac dilation. The EDV may increase up to 300ml, the force of contraction increases, and the ESV decreases so much.

The limiting factor in hypertrophy is that the coronary blood flow is not increasing in parallel with myocardial hypertrophy so relative cardiac ischemia may develop due to inadequate perfusion of the cardiac cells.

This is the work needed to pump a certain volume of blood (cardiac output) against the arterial blood pressure resistance. It consists of left ventricular work, which is normally about 6Kg meter/minute at rest, and right work, which is about 1/6 of that of the left ventricle, since aortic pressure is six-seven times (100 mm Hg) the pulmonary pressure (15 mm Hg)

O2 consumption by the heart