Facial muscles control the parts of your face, They are important for chewing and making facial expressions, They are also called craniofacial muscles, they consist of 20 flat skeletal muscles lying underneath the skin of the face and scalp, Most of them originate from the bones or fibrous structures of the skull and radiate to insert on the skin.

Anatomy of the face 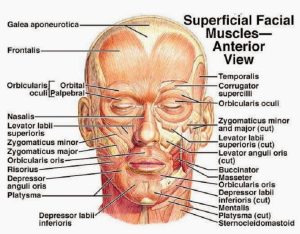 Muscles of the face

It is a circular muscle around the orbital opening, It is formed of an orbital part that covers the bone, lacrimal and palpebral parts that are present in the eyelid.

It is a circular muscle that surrounds the mouth opening.

It is the muscle of the cheek, It is an accessory muscle of mastication.

Its action: It empties the vestibule of the mouth by compressing the cheek against the teeth, It is pierced by the duct of the parotid gland.

Arteries of the face

Branches of facial artery in the face

Veins of the face

The venous drainage of the face is:

It commences at the medial angle of the eye as a direct continuation of the angular vein, It lies behind the facial artery, It usually joins the anterior branch of the posterior facial (retromandibular) vein to form the common facial vein that drains into the internal jugular vein.

Begins behind the neck of the mandible by union of the superficial temporal and the maxillary veins, This happens inside the substance of the parotid gland, It passes downwards and divides into anterior and posterior branches, The anterior branch unites with the anterior facial vein to form the common facial vein that finally drains into the internal jugular vein, The posterior branch of the retromandibular vein unites with the posterior auricular vein to form the external jugular vein (superficial to the sternomastoid muscle).

It begins behind the angle of the mandible by the union of:

Dangerous site of the external jugular vein: 1 inch above the clavicle where it pierces the deep fascia of the roof of the posterior triangle.

Nerve supply of the face

Motor: all the muscles of the face are supplied by the facial nerve, which is the seventh cranial nerve. It gives five terminal branches in the face that supply the facial muscles: theses branches are: