The circulatory system of the blood includes systemic circulation and pulmonary circulation. Circulatory system is known as the cardiovascular system or the vascular system, It allows blood to transport nutrients, oxygen, carbon dioxide, hormones, and blood cells to and from the cells in the body, It helps in fighting diseases, It stabilizes the temperature, and pH, and maintains homeostasis.

Arteries of head and neck 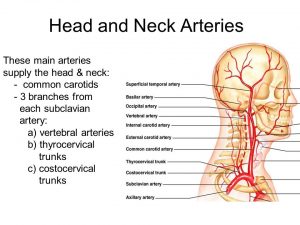 Arteries of head and neck

Course: The scalenus anterior divides its course into three parts:

Termination: At the outer border of the first rib where it continues as the axillary artery.

End: The common carotid artery ascends within the carotid sheath and opposite the disc between the 3rd and 4th cervical vertebrae it ends by giving two terminal branches: external and internal carotid arteries.  Surface anatomy is represented by a line extending from the sternoclavicular joint to the upper border of the thyroid cartilage.

Beginning: Begins at the level of the superior border of the thyroid cartilage (disc between C3 and C4 vertebrae).

End: Opposite the neck of the mandible by dividing into:

Branches of the external carotid artery:

Surface anatomy is represented by a line extending from the upper border of the thyroid cartilage to the neck of the mandible.

Beginning: It begins as one of the two terminal branches of the common carotid artery, opposite to the upper border of the thyroid cartilage.

Course: It is subdivided into four parts which are:

Course of the cervical part:

Veins of head and neck

There are two types of veins:

Begins: by the union of the posterior auricular and posterior division of retromandibular (posteri or facial) veins.

Development of the vascular system

Fate and derivatives of the aortic arches

The first arch: It disappeared, except a part forming the maxillary artery.

The second arch: It disappeared, except a part forming the stapedial artery of the ear.

The internal carotid artery is formed from:

The right subclavian artery is formed from:

The fifth arch: It degenerates completely on both sides.

Relation of the recurrent laryngeal nerve