The cranial cavity is the space within the skull that accommodates the brain, It is known as intracranial space, It is the space formed inside the skull, It is formed by eight cranial bones known as the neurocranium that in humans includes the skull cap & forms the protective case around the brain, Eight fused cranial bones together form the cranial cavity: the frontal, occipital, sphenoid, and ethmoid bones, and two each of the parietal and temporal bones.

Anatomy of the cranial cavity

The dura mater lines the inner aspect of the skull cap and the cranial cavity, It protects the brain from shocks and friction with the hard skull, The dura is composed of 2 layers:

The inner layer of the dura forms 4 folds inside the cranial cavity. 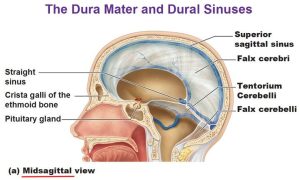 I. Falx cerebri: a sickle-shaped fold, lies between the two cerebral hemispheres.

II. Tentorium cerebelli: a tent-like fold that covers the cerebellum.

Attachments: it is attached to the anterior and posterior clinoid processes.

It runs along the posterior half or two-thirds of the free margin of the falx cerebri. It is of a cylindrical form, increases in size as it passes backwards, and ends at the free margin of tentorium cerebelli by uniting with the great cerebral vein to form the straight sinus.

It is found at the line of junction of the falx cerebri with the tentorium cerebelli, It is formed by the union of the inferior sagittal sinus and the great cerebral vein, It terminates at the internal occipital protuberance by forming the left transverse sinus, It may open into the confluence of sinuses.

It begins as a continuation of the transverse sinus, It ends by passing through the posterior compartment of the jugular foramen to continue as the internal jugular vein.

They are usually two in number; anterior and posterior sinuses, They connect the two cavernous sinuses across the middle line, The anterior passes in the anterior border of diaphragma sellae, The posterior passes in the posterior border of diaphragma sellae, They form with the cavernous sinuses a venous circle (circular sinus) around the hypophysis cerebri.

It is the smallest of the cranial sinuses, It is situated in the attached margin of the falx cerebelli, It is usually single, but occasionally there are two, right and left sinuses, They arise from the right and left transverse sinuses, They fuse together to form a single sinus which ends into the sigmoid sinus in each side, It communicates around the margin of the foramen magnum by several small meningeal veins.

Anatomy of the scalp

The skin of the scalp extends from the eye brows anteriorly to the nuchal lines posteriorly and temporal lines on each side. The scalp is important clinically because trauma to the scalp is frequent and produces profuse bleeding, The scalp is made up of five layers:

Blood supply of scalp: there are five arteries that supply the scalp:

It is formed of occipital and frontal bellies which are attached to the galea aponeurotica.

Injury of the scalp may lead to its separation from the skull, This separation occurs at the loose areolar connective tissue layer (fourth layer), that is why this layer is considered as the dangerous layer of the scalp.