Bones protect our vital organs and allow us to move. they act as a storage area for minerals, particularly calcium, they serve as a reservoir for calcium and phosphorus, essential minerals for various cellular activities throughout the body.

The bones of the upper limb consist of:

The clavicle has a shaft and 2 ends (medial and lateral):

Lateral 1/3 of the shaft 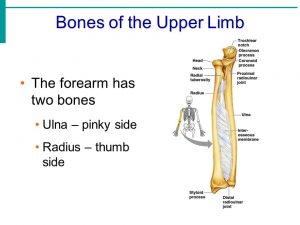 Medical 2/3 of the shaft

It is cylindrical and convex anteriorly. It has 4 surfaces: anterior, posterior, superior, and inferior. The superior surface is smooth. The inferior surface is rough and presents a subclavian groove in its intermediate 1/3 for the insertion of the subclavius muscle.

Identification of the side (Right or left)

Attachment and ligaments that are attached to the clavicle include:

Ossification of the clavicle

It ossified in a membranous ossification. 2 primary centres appear about 5th weak of intrauterine life. One secondary centre for each end appears about the age of 15 years. and it is the first bone in the body to ossify.

Articulations of the clavicle

The weakest point of the clavicle is the junction between the medical 2/3 and the lateral 1/3. Fracture at this point due to falling on an outstreched upper limb will lead to:

The scapula is the posterior bone of the shoulder girdle. It is a triangular flat bone. It is situated on the postero-lateral aspect of the thoracic cage. It connects the clavicle with the humerus. It has:

Surfaces of the scapula

Borders of the scapula

Angles of the scapula

Processes of the scapula

Identification of the side of the scapula (right or left):

The humerus is a long bone that has a shaft, upper end, and a lower end.

The upper end consists of a head, two tuberosities, and two necks. The head forms less than half a sphere and is directed medially. It is separated from the tuberosities by the anatomical neck. The greater tuberosity is a large projection on the lateral aspect of the upper end. It gives attachments to the following muscles from above downwards: supraspinatus, infraspinatus, and teres minor.

The lesser tuberosity is a small projection on the anterior aspect of the upper end. It gives attachment to the subscapularis muscle. The two tuberosities are separated by an intertubercular groove (bicipital groove) The bicipital groove has a floor, medial lip, and lateral lip. The pectoralis major muscle is attached to the lateral lip.

The Latissimus dorsi is attached to the floor. The Teres major is attached to the medial lip. The long head of the biceps brachii muscle after taking origin from the super-glenoid tubercle of the scapula descends by passing in the bicipital groove. The upper end is separated from the shaft by a constricted part of the bone, the surgical neck.

The lower end possesses two articular surfaces (trochlea and capitulum), two epicondyles (medial and lateral), and three fossae (coronoid, radial, and olecrenon). The trochlea is a pully-shaped piece of bone that articulates with the trochlear notch of the ulna in the elbow joint. The capitulum is a small rounded piece of bone that lies lateral to the trochlea. It articulates with the upper surface of the head of the radius in the elbow joint.

The medial and lateral epicondyles are medial and lateral prominences from the lower end of the humerus. The medial is more prominent and carries the common flexor origin (for the flexors that lie in the front of the forearm). It also carries a groove on its posterior aspect for the ulnar nerve. The lateral epicondyle carries the common extensor origin (for the muscles at the back of the forearm).

How can you identify the side, whether right or left?

Nerves related to the humerus

The fascia is continuous inferiorly with the axillary fascia. Costocoracoid membrane is the upper part of the clavipectoral fascia which extends between the 1st costal cartilage and the coracoids process.