The blood vessels transport blood throughout the human body, They transport blood cells, nutrients, and oxygen to the tissues of the body, and they take waste and carbon dioxide away from the tissues, Blood vessels make up two closed systems of tubes that begin and end at the heart which are the pulmonary vessels and the systemic vessels.

Histology of the blood vessels

Histologically, the wall of any blood vessel, except capillaries, is formed of three concentric layers:

It consists mainly of: 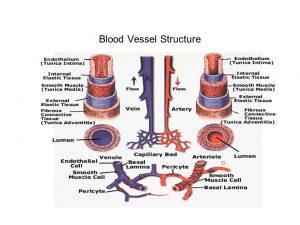 Arteries are classified according to their size into large elastic arteries, medium-sized arteries, and arterioles.

These include aorta and its large branches. These arteries have the previously-mentioned general histological structure of a blood vessel, together with the following characteristics.

These include femoral, radial and most of the named arteries. These arteries have the previously-mentioned general histological structure of a blood vessel, together with the following characteristics.

Arterioles are responsible for peripheral resistance. The control blood flows into the capillaries. Histologically, they are characterized by:

Veins are classified according to their size into large veins, medium-sized veins and venules.

They are paired with the elastic arteries and these include the venae cavae, subcivian and portal veins. They have a relatively wide lumen and they are characterized by the following:

Tunica intima: a thin layer with no internal elastic lamina.

These include most named veins that accompany their medium-sized arteries in the neurovascular bundle. Blood in the venous system is under a very low pressure than that may contain RBCs and not circularly opened like that of corresponding arteries. Their caliber is larger than the arteries with their walls are much thinner mainly due to reduced amount of muscular and elastic components.

They have a relatively thin wall compared to their wide caliber. They are further classified into: