The urinary passage begins with the minor calyces that pour the formed urine into the major calyces. These, in turn, open into the renal pelvis, which drains into the ureters. All these passages are lined by transitional epithelium. 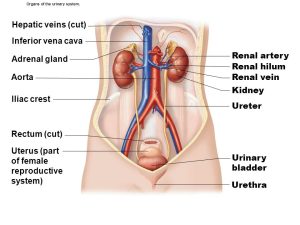 The ureter descends vertically on the psoas major muscle then crosses the bifurcation of the common iliac artery over the sacroiliac joints to enter the pelvis.

2) Pelvic part of the ureter

the ureter crossing the end of the common iliac artery (under the apex of the pelvic mesocolon, On the left side), it descends downwards & backwards, on the sidewall of the pelvis. Intramural part of the ureter is 1-2 cm length, oblique part inside the wall of the bladder.

Blood supply of the ureter

Histological structure of the wall of the ureter

In cross-section, the ureter in the empty state has a stellate-shaped, narrow lumen. It is formed of the following layers.

Adventitia: It is formed of fibro-elastic connective tissue that binds the ureter to the surrounding structures.

It is a hollow muscular organ acting as a reservoir for urine.

Surfaces and relations: Each surface is triangular in shape.

It is covered by the peritoneum and related to the superior vesical artery and coils of the ileum. Other relations differ between males and females.

It is related to:

Posterior surface (base of the bladder):

Inside the pelvic cavity, it is situated with its:

Angles of the urinary bladder

Inferior angle (neck): It is the point of meeting of the base with the two inferolateral surfaces of the bladder. It lies 1 inch behind the lower border of symphysis pubis. The urethra gets exit from this point. It is surrounded by the base of the prostate in males and pelvic fascia in females.

Two posterosuperior angles: The two ureters enter the bladder at these angles.

Ligaments of the bladder

To the apex: median umbilical ligament.

Interior of the bladder

It is a triangular area, can be seen in the mucosa of the posterior wall of the bladder, between three openings; two ureters and internal urethral meatus. It has smooth surface even in empty bladder, due to its embryonic origin (mesodermal not endodermal like the other mucosa). It is more vascular, sensitive and elastic than the other mucosa. It contains special smooth muscle called superficial trigonal muscle that:

Factors preventing urine reflux to the ureter during bladder contraction

Interureteric bar: It is raised transverse ridge between the two ureteric orifices.

It is a small rounded elevation that lies immediately behind the internal urethral opening. It is caused by the protrusion of underlying middle lobe of the prostate.

Arterial supply: by the following arteries:

Lymphatic drainage: Lymphatic vessels travel with the blood vessels to reach the internal iliac lymph nodes then to the para-aortic lymph nodes.

Urinary bladder pain is carried by afferent pain nerve fibers, which ascends with the sympathetic system. So the referred pain is felt in the dermatome of L1,2  (pubic region, groin, anterior external genital area, and front of the thigh).

The urinary bladder consists of a main portion (body) that collects urine and a funnel-shaped extension (neck) that connects with the urethra. Three poorly defined layers of smooth muscle make up the bulk of the bladder wall, the so-called detrusor muscle.

The wall of the posterior urethra contains smooth muscle fibers of the detrusor muscle interspersed with elastic tissue, together forming the internal sphincter. Immediately adjacent is the external sphincter, made up of voluntary, striated-muscle fibers. The bladder and sphincters receive sympathetic and parasympathetic (autonomic) as well as somatic (voluntary) innervation.

The pelvic nerves are mainly connected with S2,3 and S4 segments. Coursing through the pelvic splanchnic nerves are both sensory and motor fibers. The sensory fibers detect the degree of stretch of the bladder wall. The motor fibers are parasympathetic fibers that terminate on ganglion cells located in the wall of the bladder. Short post-ganglionic nerves then innervate the detrusor muscle. The parasympathetic activity contracts the detrusor muscle and relaxes the trigone and internal sphincter. Thus, the pelvic nerves are the main nerves of micturition.

Sympathetic innervation, from the sympathetic chain through the hypogastric nerves, connected mainly with the L1-2 segment of the spinal cord. They cause vaso constriction of blood vessels of the urinary bladder, as well as relaxation of detrusor muscle and contraction of internal sphincter resulting in urine retention. Some sensory nerve fibers also pass by way of the sympathetic nerves and may be important for the sensation of fullness and perhaps pain in some instances.

Urinary bladder pain is carried by afferent pain nerve fibers, which ascends with the sympathetic system. So the referred pain is felt in the dermatome of L1,2 (pubic region, groin, anterior external genital area, and anterior thigh).

It supplies the external sphincter of the bladder. These somatic nerve fibers that innervate the skeletal muscle of this sphincter.

Control of water balance in your body, Regulation of volume & osmolality of Body fluids