Structure of skeleton of the foot, Tarsals, Metatarsals and Phalanges

Bones of the foot can be divided into three categories: Tarsals, Metatarsals and Phalanges, Tarsals – A set of seven irregularly shaped bones. Tarsals are situated proximally in the foot, in the ankle area, Metatarsals are bones that connect the phalanges to the tarsals, There are five in number, and one for each digit. Phalanges are the bones of the toes, Each toe consists of three phalanges, a proximal, intermediate, and distal (except the big toe, which only has two phalanges).

Tarsals or Tarsal bones of the foot are organized into three rows which are proximal, intermediate, and distal.

The talus function: the talus transmits forces from the tibia to the heel bone (known as the calcaneus), Whilst numerous ligaments attach to the talus, it is not a site of muscle attachment or origin, The calcaneus lies underneath the talus, and has two articulations: 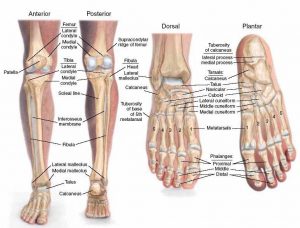 Skeleton of the foot

The calcaneus is thick, It can transmit forces from the talus to the ground, The posterior aspect of the calcaneus is marked calcaneal tuberosity, to which the Achilles tendon attaches.

Intermediate row of the tarsal bones consists of one bone, the navicular (given its name because it is shaped like a boat), the navicular articulates with the talus posteriorly, the cuneiform bones anteriorly, and the cuboid bone laterally, On the plantar surface of the navicular, there is a tuberosity for the attachment of the tibialis posterior tendon.

In the distal row, there are four tarsal bones which are the cuboid & three cuneiforms, tarsal bones articulate with the metatarsals of the foot, The cuboid is the most lateral bone in the distal row, It articulates with the calcaneus posteriorly, and two metatarsals anteriorly, As the name suggests, it is shaped like a cube, The inferior surface of the cuboid is marked by a groove for the peroneus longus muscle.

The three cuneiforms are lateral, intermediate, and medial, they are wedge-shaped bones, They articulate with the navicular posteriorly, and the metatarsals anteriorly, The shape of the bones helps to form the transverse arch across the foot.

The metatarsals are located in the midfoot, between the tarsals and phalanges, They are numbered I-V (medial to lateral). Each metatarsal has a similar structure, They consist of a distal head and proximal base, which are joined by a shaft of the bone. They have three or four articulations:

Phalanges are the bones of the toes, Most toes consist of three phalanges – proximal, intermediate, and distal, The big toe only consists of proximal and distal phalanges.

Cutaneous nerve supply of the foot:

Sole of the foot:

Dorsum of the foot: