The obturator nerve arises from the lumbar plexus (L2,3, and 4) and emerges on the medial border of the psoas muscle within the abdomen. It runs forward on the lateral wall of the pelvis to reach the upper part of the obturator foramen, where it divides into anterior and posterior divisions.

It supplies: gracilis, adductor longus, adductor brevis, and pectineus (occasionally; articular branch to hip joint; subsartorial plexus; the skin of the medial side of the thigh.

It terminates by supplying the knee joint. It supplies muscular branches to the obturator externus, adductor portion of adductor Magnus and adductor brevis.

Medial compartment of the thigh muscles

The adductor canal is an intermuscular cleft situated on the medial aspect of the middle third of the thigh beneath the sartorius. It begins above at the apex of the femoral triangle and ends below at the opening in the adductor Magnus. In cross-section, it is triangular. 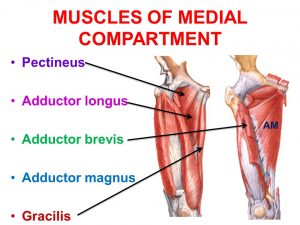 On examination of the longitudinal section:

On examination of cross-section:

The smooth muscle fiber is elongated, fusiform, and contains a single central nucleus. The sarcoplasm is filled with myofilaments. The other organelles are present mainly at the two poles of the nucleus.

The sarcoplasmic reticulum is poorly developed and consists of narrow sarcotubules that are often associated with the caveolae.

They are mainly located at the poles of the nucleus. They include mitochondria, Golgi complex, centrioles, few cisternae of rough endoplasmic reticulum, and ribosomes. Some glycogen granules and occasional fat droplets are also found.

The skeletal muscle fibers cannot divide. Increased muscle mass is due to the enlargement of existing muscle fibers (hypertrophy). This occurs by: