The popliteal fossa is located at the back of the knee joint, It is known as the hough or knee-pit in analogy to the armpit, The bones of the popliteal fossa are the femur & the tibia, it is an area where blood vessels and nerves pass superficially, and with an increased number of lymph nodes, and it is continuous with the fascia lata of the leg.

It is a diamond-shaped intermuscular space present on the back of the knee. It is the main conduit for neurovascular structures entering and leaving the leg. It is diamond-shaped with four borders. These borders of the popliteal fossa are formed by the muscles in the posterior compartment of the leg and thigh. 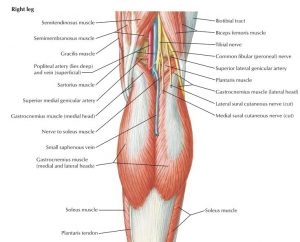 Skeleton of the leg

In the leg, the bones are the tibia medially and the fibula laterally.

The tibia is the main bone of the leg, forming what is more commonly known as the shin. It expands at the proximal and distal ends, articulating at the knee and ankle joints respectively. It is the second-largest bone in the body; this is due to its function as a weight-bearing structure.

It is widened by the medial and lateral condyles, aiding in weight-bearing. The condyles form a flat surface, known as the tibial plateau. This structure articulates with the femoral condyles to form the major articulation of the knee joint. Located between the condyles is a region called the intercondylar eminence – this consists of two tubercles and a roughened area. This area is the main site of attachment for the ligaments and the menisci of the knee joint. The tibial intercondylar tubercles fit into the intercondylar fossa of the femur.

The structures attached to the intercondylar area

The anterior & posterior horns of the lateral semilunar cartilage lie just in front and just behind the intercondylar eminence.

Shaft of the tibia

The lower end has 5 surfaces:

1- Joints of the upper end:

2- Joints of the lower end:

It is a very thin and long bone on the lateral side of the tibia. It is a long bone that has an upper end, a shaft, and a lower end. Upper end: has head and neck

It is flat called lateral malleolus. Its lateral surface is subcutaneous and is continuous above with a rough, triangular, subcutaneous area of the shaft. Its medial aspect has a smooth triangular articular facet (for the lateral surface of the talus). Superior to the articular surface of the lateral malleolus is a rough triangular interosseous area that is connected to the tibia by the interosseous tibiofibular ligament & malleolar fossa below and behind the articular facet. Its posterior surface has a shallow groove (for the tendons of the peroneus longus & brevis).

How to know if a fibula is right or left?

You can know whether a fibula is right or left simply by looking to malleolar fossa in the lateral malleolus, if it is on the right-hand side, the fibula is right and vice versa.