Staphylococcus is a Gram-positive bacteria in the family Staphylococcaceae from the order Bacillales, Under the microscope, they appear spherical (cocci), and form in grape-like clusters. Staphylococcus includes at least 40 species, nine have two subspecies, one has three subspecies, and one has four subspecies, Many species cannot cause disease and reside normally on the skin and mucous membranes of humans and other animals.

Staphylococci are Gram-positive spherical cells arranged in irregular clusters, They are non-motile and do not form spores. 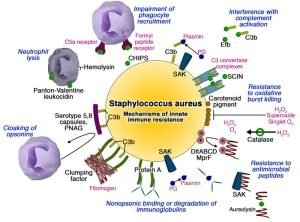 The pathogenic capacity or virulence of a given strain of Staphylococcus aureus is the combined effect of structural factors & extracellular factors including toxins and enzymes.

Protein A is a cell wall component of Staphylococcus aureus strains, It has a strong affinity for the FC portion of the IgG molecule which becomes firmly bound to the staphylococcal cell wall, thus interfering with opsonization and phagocytosis.

Clumping factor (previously, bound coagulase) is a bacterial surface protein that binds fibrinogen converting it to insoluble fibrin which results in the protection of bacteria from phagocytosis by coating the organism with a layer of fibrin.

B. Enzymes and toxins

Staphylococcus aureus produces coagulase which may deposit fibrin on the surface of staphylococci, hindering its ingestion by phagocytic cells.

Include a hyaluronidase, or spreading factor, a/staphylokinase resulting in fibrinolysis, proteinases, lipases, and B-lactamase.

Mode of transmission of staphylococcal infections:

Staphylococcus epidermidis is present in large numbers as part of the normal flora of the skin. Despite its low virulence, it is an important agent of hospital-acquired infections associated with the use of implanted prosthetic devices, such as heart valves, and catheters.

This organism is a frequent cause of cystitis in women, probably due to its presence as a part of normal vaginal flora. Staphylococcus saprophyticus can be distinguished from Staphylococcus epidermidis and other CONS by its resistance to novobiocin.

Gram-stained smears often reveal Gram-positive cocci in clusters among pus cells. It is not possible to distinguish saprophytic from pathogenic staphylococci by smears.

Specimens inoculated on blood agar plates give rise to typical colonies in 18 hours at 37°C. Specimens contaminated with a mixed flora (vomitus, stool) can be cultured on mannitol salt agar.

The gram-stained film performed from culture reveals. Gram-positive cocci are arranged in irregular clusters. Colonies are further identified by their biochemical reactions.

In Staphylococcus aureus hospital outbreaks, it is critical to define the carrier who initiated the outbreak. In tracing the source of infection, suspected patients, hospital staff, or food handlers are tested for the possibility of being nasal or skin carriers of the strain causing either the hospital epidemic or food poisoning. The isolated strains are subjected to typing in specialized laboratories.