Acquired (adaptive or specific) immunity is a type of immunity that develops when a person’s immune system responds to a foreign substance or microorganism, or that occurs after a person receives antibodies from another source, Types of acquired immunity are adaptive and passive, Adaptive immunity occurs in response to being infected with or vaccinated against a microorganism.

Acquired immunity is not present at birth. It is learned, when a person’s immune system encounters foreign invaders and recognizes nonself substances (antigens), the components of acquired immunity learn the best way to attack each antigen and begin to develop a memory for that antigen, Acquired immunity is called specific immunity because it tailors its attack to a specific antigen previously encountered, Its hallmarks are its ability to learn, adapt, and remember.

In active immunity, the host cells learn to respond to foreign material, and the host actively produces the Abs, so they last longer than the readymade Abs given for immediate protection Its major disadvantage is its slow onset, especially the primary response.

It is the state of resistance built up in an individual following effective contact with foreign Ags (microorganisms or their products). The contact can be the result of clinical or subclinical infection. 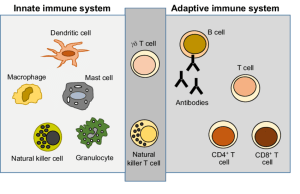 Difference between adaptive and acquired immunity

Through injection of killed or attenuated organisms toxoids, or recombinant peptides i.e., immunization by vaccines.

Immunity is temporary and it gives immediate protection because of receiving performed Abs.

It results from the introduction of an Ag into the body, The immune response may be:

1. Innate or non-specific: as inflammation and phagocytosis.

They are phagocytic cells that are mainly concerned with processing and presentation of protein Ags to the lymphocytes and so they are called the antigen-presenting cells, They can also secrete cytokines e.g. interleukin-12, Other cells can also act as antigen-presenting cells such as Langerhans cells of the skin, dendritic cells, and B-lymphocytes.

They originate from a stem cell in the bone marrow, and mature in the microenvironment of the thymus where they acquire a cluster of differentiation (CD) molecules, and differentiate into committed cells expressing specific T cell receptors (TCRs). T lymphocytes are important in defense against intracellular microbes, Several different subsets of T cells have been described, each with a distinct function, These include:

Mature in the bone marrow and do not pass by the thymus, They are responsible for humoral immunity, All immature B cells carry IgM Immunoglobulin on their surface, These immunoglobulins serve as receptors (B-cell receptors (BCRS) for a specific antigen so that each B cell can respond to only one antigen or a closely related group of antigens, Mature human B-lymphocytes perform many functions including antibody secretion (after changing into plasma cells), Ag processing and presentation and cytokine secretion.

Adaptive immune responses develop in steps, consisting of antigen recognition, activation, proliferation, and differentiation of specific lymphocytes into effector and memory cells; elimination of the antigen; and decline of the response. The major events taking place in the specific immune response are:

Activation of the T-helper cell

Three kinds of signals are involved in the activation of T cells by APC:

During these events, these Th cells are able to proliferate and differentiate into effector T helper cells i.e., Th1, Th2, and Th17 cells.

There are two major pathways of B-cell activation:

1) T-cell-dependent activation: The full response of B cells to protein antigens requires help from T cells.

T-cytotoxic cells become activated when they recognize their antigen on the surface of a target cell, complexed with MHC class I molecule, and also by the effect of cytokines (e.g. IL 2) produced by Th1 cells. They differentiate into effector cytotoxic T lymphocytes (CTLS) that proceed to kill antigen-bearing target cells by their toxic granule content.

Some activated B and T-cells remain as Memory Cells that can respond to subsequent encounters with the same antigen, enabling a faster and more efficient response to re-infection with the same organism

The innate and adaptive arms of the immune response do not operate independently of one another, “Phagocytic cells process and display antigen to facilitate stimulation of specific T- lymphocytes, “Macrophages secrete cytokines, which help trigger the initiation of specific immune responses, T lymphocytes produce cytokines which enhance the microbicidal activities of phagocytes.