Motor is a device which converts the electric energy into mechanical energy, It depends on the torque due to the flow of the electric current in a coil which can rotate in a magnetic field, The electric motors are classified into two different categories which are Direct Current (DC) motor & Alternating Current (AC) motor, DC motor is an electric motor which runs on direct current power.

When the electric current passes in the coil, two forces equal in magnitude and opposite in direction affect the two longitudinal sides of the coil producing a torque that leads to the rotation of the coil continuously about its axis in the same direction.

Thus the two metallic cylinder halves interchange their position relative to the two brushes each half cycle, As a result the electric current passing in the coil reverses direction once each half cycle. 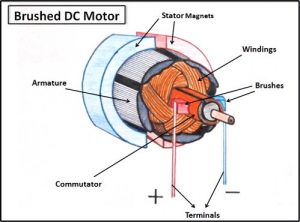 Explaining the operation of the motor through a complete revolution

In the first half cycle:

When the plane of the coil is parallel to the lines of the magnetic flux, the two graphite brushes touch the two metallic cylinder halves, thus the electric current passes in the coil producing two magnetic forces that affect the two sides of the coil (ab, cd) in two opposite directions, The two produced forces (couple) forming a torque and the coil begins to rotate.

As the coil rotates, the torque decreases gradually till it vanishes when the plane of the coil becomes perpendicular to the lines of the magnetic flux and the brushes touch the insulator between the two cylinder halves, But the coil having gained a momentum continue rotation due to inertia, which in turn pushes the coil to the second half cycle.

In the second half cycle:

The plane of the coil becomes parallel to the magnetic flux once more and the two metallic cylinder halves interchange their position thus the direction of the electric current is reversed in the coil which forms the torque (maximum value) that helps to keep the rotation of the coil in the same direction.

As the coil rotates, the torque decreases gradually till it vanishes when the plane of the coil becomes perpendicular to the lines of the magnetic flux, but the coil continue its rotation due to inertia till it finalize a complete revolution and becomes parallel to the flux lines again, this is repeated each complete revolution.

How to increase the efficiency of rotation of the electric motor

Using a group of coils separated by small equal angles to keep the torque constant at the maximum value by getting always a coil parallel to the magnetic flux and affected by the maximum torque, thus the coils rotate in a higher speed.

Dividing the metallic cylinder into a number of segments double the number of coils, so that, every two opposite parts of the metal cylinder touch the brushes during rotation while they are in the position of maximum torque.

The electromagnetic induction is used in recorder & hard disk, where the electric signal is converted into magnetic field that magnetizes the magnetic tape in the recording head, and when it works, the magnetic head starts to head what is previously recorded and change it into electric signal again.