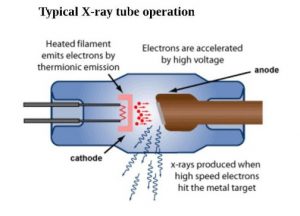 Analyzing a beam of X-rays generated from a target to compounds of different wavelengths, we find that the spectrum consists of two components.

They are called Soft X-ray spectrum, bremsstrahlung, such as braking radiation, They can be generated when the velocity of the colliding electrons (coming from cathode) is reduced upon passing through a retarding electric field due to the electrons of the target material, its energy decreases due to repulsion, collision & scattering.

According to Maxwell-Hertz theory, the decrease in the energy of the electrons converts into electromagnetic radiation contains all the different possible wavelengths because the electrons lose their energy gradually.

The factors affecting the wavelength: The potential difference between the filament and the target, (λm ∝ 1 / V) and it does not change with the changing of the target material.

They are called Hard X-ray spectrum or trough X-ray spectrum, They can be generated when an emitted accelerated electron (coming from the cathode) collides with an electron close to the nucleus of the target material atom then if the later electron receives sufficient energy, it jumps to a higher level or leaves the atom altogether and is replaced by another electron from a higher level.

The difference in energy appears as radiation with a definite wavelength which is determined from the relation:  Δ E = E2 − E1 = h c / λ

The factors affecting the wavelength:

Conditions to obtain a line spectrum (characteristic) of a target material:

Studying the crystalline structure of materials: one of the important features of X-rays is diffraction, as they penetrate materials, The atoms in the crystal act as a diffraction grating (which is a generalization of diffraction from a double slit), forming bright and dark fringes depending on the difference in the optical path.