The alternating current is represented graphically by a sine wave form because the electric current intensity (I) and the electromotive force (V) vary their values and direction based on the following relation:

The electric current takes time to complete one vibration, called the periodic time (T), It makes a number of complete vibrations every one second, called frequency (f), Periodic time of the AC current (T) is the time taken by the alternating current to make one complete cycle, T = 1 / f.

When the frequency of the alternating current is 50 Hz, It means that the number of complete cycles made by the AC current in one second = 50 cycles.

Properties of the alternating current 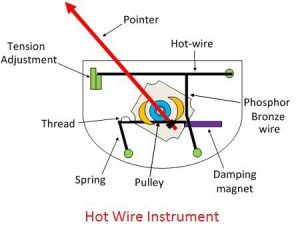 Moving coil ammeters are not valid to measure the value of the alternating current since it changes its intensity and direction continuously, where the idea of the moving coil ammeter is based on the stability of the intensity and direction of the magnetic field produced due to the flow of the DC current, Thus, the alternating current intensity is measured depending on its thermal effect through the hot wire ammeter.

The hot wire ammeter is a device used to measure AC or DC current intensity based on the thermal expansion of a wire made of platinum and iridium alloy that is heated due to the flow of the electric current through it.

Hot wire ammeter is used in measuring the effective value of the alternating current and measuring DC current intensity Because its working idea is based on the thermal effect of the electric current that independent of the current direction.

The hot wire ammeter is connected in series in the circuit which is required to measure the AC current passing through it, When the current to be measured passes through the instrument, the wire AB expands, consequently the tension in the wire decreases (loosen).

The pointer reading indicates the effective value of the AC current, When the current is cut from the ammeter, the wire cools down and contracts pulling the silk thread returning the pointer back to the zero position.

To overcome this defect the wire is stretched on a plate made of a metal having the same expansion coefficient of the wire but isolated from it.

Method of calibration: It is calibrated by comparing it to moving coil galvanometer when they are connected together in series in a DC circuit.

The stretched wire between the screws A, B is made of platinum and iridium alloy to expand considerably when heated due to the flow of electric current, The hot wire ammeter can measure both the AC and DC currents because the thermal effect of the electric current does not depend on the current direction.

Hot wire ammeter depends on the thermal effect of electric current, It is used in measuring the DC current and the effective value of the AC current, measuring scale is non-uniform, Its reading is affected by the surrounding atmospheric temperature, The pointer moves slowly when connected to or disconnected from the electric current.

Moving coil ammeter depends on the magnetic effect of electric current, It is used in measuring the DC current only, measuring scale is uniform, Its reading is not affected by the surrounding atmospheric temperature, The pointer moves fast when connected to or disconnected from the electric current.

Alternating current is obtained by AC dynamo, It is variable in intensity and direction, It can be transmitted for long distances without a big loss in energy by raising its potential using transformers, It can be converted into DC current, It is measured by hot wire ammeter, It is used in lighting and heating.

Direct current is obtained by DC dynamo, Electric cells and car battery, It has constant intensity and direction, It can not be transmitted for long distances as it loses a big amount of energy in the form of heat energy, It can not be converted into AC current, It is measured by hot wire ammeter and moving coil ammeter, It is used in lighting, heating, electrolysis and charging batteries.