The transformer is a device used to step up or to step down an AC voltage, It is used in some home appliances such as bells and fridges, It is used to decrease the energy losses during its transfer from generators at electric power stations to far places where it can be distributed among buildings to be used.

Two coils: a primary coil and a secondary coil made of copper wires, due to the small value of the copper resistivity, so the coil resistance becomes small and decreases the energy losses inside it in the form of heat.

The two coils are wound around a soft iron core made of thin siliconic iron sheets (laminas) insulated from each other, because of the large value of the iron permeability, that concentrates the magnetic flux density and when the core is made of thin iron sheets its resistance increases and that decreases the eddy currents and also the energy losses in wires.

When the circuit of the secondary coil is closed, the electric current passes in the primary coil and a variable magnetic field is generated, The iron core concentrates the magnetic flux resulting from the alternating current and makes the lines of such a field pass through the secondary coil turns. 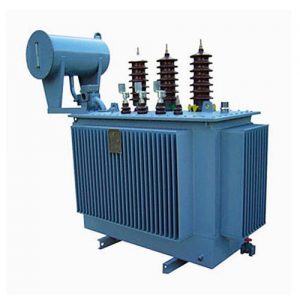 Where: ΔΦm/Δt is the rate of flux lines that cut the secondary coil.

The electromotive force in the primary is in turn related to the rate of change of the magnetic flux and is determined from the relation:

Assume no magnetic energy loss, dividing the above two relations one get the following formula:

If Ns > Np then (emf)s > (emf )p and the transformer is a step up transformer.

If Ns < Np then (emf)s < (emf)p and the transformer is a step-down transformer.

let us assume that there is no loss in the electric energy in the transformer (almost zero resistance), then according to the law of conservation of energy, the electric energy is given by the source in the primary coil must equal that delivered to the load in the secondary coil.

From which the input power (for primary coil) is equal to the output power, (for secondary coil)

When the secondary coil circuit is opened, the electric current almost vanishes in the primary coil, because the self-induction in the primary coil generates induced emf that balance the emf of the external source where a small part of it may be consumed in resistance of the wire.

The step-down transformer that decreases the potential is considered a current rising transformer and vice versa because the power is constant, so the potential difference is inversely proportional to the electric current intensity based on the relation: I = Pw / V

A step up transformer is used to raise the electric potential to a very high value which is associated with a decrease in current to a very low value, consequently, losses decrease in the electric energy during power transmission along great distances, This because the power lost in wires = I² R, The falling in potential = I R.

Where: I is the electric current intensity passing through the wires and R is the ohmic resistance of the wires, from which it is clear that the power consumed in wires is directly proportional to square the current intensity.

By decreasing the current intensity passing through the transmission lines by 1/100 of its value in the primary coil using a step down transformer, the loss in energy is decreased by 1/10000 of its value.

The electric power at the distribution zones

A step down transformer is used to lower the potential difference to 220 Volt which is the working household voltage for electric appliances.

Efficiency of the transformer

When the efficiency of the electric transformer is 80 %, It means that the ratio between the electric energy gained from the secondary coil to the energy given from the source to the primary coil within the same time = 80/100.

In case of an electric transformer having two secondary coils each is connected to a different device, then:

When operating each device separately:

When operating the two devices together at the same time: