Autonomous Fire Fighter Robot is the robot that autonomously detects and extinguishs the fire, It uses the flame sensor for detection, The fire extinguisher along with the electronic valve (actuator) is used to extinguish the detected fire.

The robot can rotate while actively scanning for the fire, This scanning is performed by the sensors placed on the sides, When the fire is detected, The robot can move in the direction of the fire and it stops 30 cm in front of it and trigger the extinguisher to turn out the fire.

The firefighting robots can save a lot of lives someday, The lives of those affected by the fire disaster as well as lives of those people working as the firefighters, It can be useful in certain types of incidents where the environment will be very dangerous for the humans such as the hazardous materials, the radioactivity or the propane tank which can explode.

The robots assisting firefighters are not an often seen sight, There are robotic devices which can already be used for such purposes, These include the bots that can be thrown into the fire site to inspect the situation, as well as the large remote-controlled fire extinguishers. 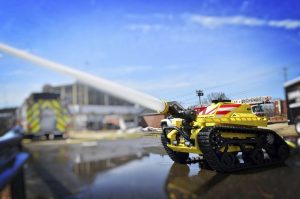 The artificial intelligence fire fighting robot is a movement-based robot, It is used to sense the fire and it spreads the water over that direction, we use RF communication to communicate between the robot and the control room that is placed in the remote place.

The fire fighting has two sensors, It moves in all the directions from its position, When the flame or high-temperature point is detected, the robot motion will stop automatically and it indicates the fire that has been detected.

The fire fighting has the microcontroller that is the most important of the design, It acts as the brain for the robot, It interfaces all the sensors and the motors, It contains all the code for the robot operations.

The controller is the part of the robot which operates the mechanical arm and it maintains the contacts with its environment, This device is the combination of the hardware and the software which helps it to carry out its assigned tasks.

Most of the firefighting robots are controlled remotely, They are tethered by the fire hose which supplies the water, They have infrared and standard cameras that transmit the images back to the operator.

The fire fighting robot helps to detect the exact direction of the fire source, It has the capability of sensing accurately with increased flexibility, Low cost in the long run, It is reliable and economical, by placing the sensors appropriately we can efficiently detect the location of the fire.

It is the human-sized autonomous robot capable of finding and suppressing the shipboard fires and working seamlessly with the human firefighters, It is capable of many-directional walking, balancing in the sea state conditions and traversing obstacles.

It is capable of manipulating fire suppressors, It can use existing thermal shielding equipment, It is capable of autonomous navigation of the shipboard environment with an appropriate sensor suite.

It can offer the fire detection, the environmental monitoring and it can present the situation awareness capabilities, It can make use of the broad range of fire suppression technologies, It is able to withstand higher heat for longer periods than the human firefighters, It works with the human firefighters, responds to the gestures and the commands.

It can develop the autonomous systems for the fire safety and the damage control, It will reduce the ship’s vulnerability to damage and decrease the recovery time while significantly reducing the life cycle costs, size and weight of the future damage control systems.

It is a technology that will reduce the human risks, It provides the alerts based on the detection of gases and incipient fires, It aides the humans in suppressing the fire and provide the situation awareness.