Robotic sensing is the subarea of robotics science intended to give the robots sensing capabilities so that the robots are more human-like, Robotic sensing mainly gives the robots the ability to see, touch, hear and move and it uses algorithms that require the environmental feedback.

Robotic sensors are used to estimate the robot’s condition and environment, These signals are passed to the controller to enable the appropriate behavior, The sensors in the robots are based on the functions of the human sensory organs, The robots require the extensive information about their environment in order to function effectively.

Robots need Robot Sensors to know the world around them, There are many Robot Sensors including ultrasonic, the temperature & the humidity, the force and a lot more to increase the robot awareness .

The sensor is the sophisticated device which measures the physical quantity such as the speed or the pressure and it converts it into the signal which can be measured electrically, The sensors are based on several working principals and types of measurements, almost all types of sensors emit the signals and measure the reflection to make measurements.

The sensors provide analogs to the human senses, They can monitor other phenomena for which the humans lack explicit sensors and they can measure the physical properties such as the distance between the objects.

The sensors can measure the physical orientation & the co-ordinates of the object in the space, they can measure the heat, The wavelength of infrared or ultra violet rays, the temperature, the magnitude and the direction.

The accuracy is very important in detecting and tracking the objects, Environmental condition affect on the sensors such as the temperature and the humidity, you can select the sensors that can be used to build the robot. 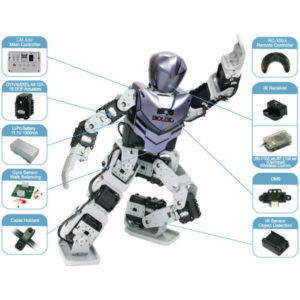 The presence of the object can be detected with the proximity sensors, There are many sensors such as the ultrasonic sensors, the capacitive, the photoelectric, the inductive or the magnetic, Tracking the objects can work using the proximity sensors (ultrasonic sensors), for the advanced applications generally it is used the image sensors (webcams) and the vision software like OpenCV.

Many sensor technologies are used to build the proximity sensors, ultrasonic sensors, capacitive, photoelectric, inductive or magnetic, Motion detectors are based on infrared light, ultrasound or microwave/radar technology, Image sensors are digital cameras, camera modules and the other imaging devices based on CCD or CMOS technology.

Uses of sensors in Robotics

The sensors are one of the useful technologies that  play the vital role in the robotics field, They are highly required in the robotics in Safety monitoring, Interlocking in work cell control, The quality control in work part inspection and data collection of the objects in the robot work cell.

The sensors are used in the industrial robotics for monitoring the dangerous and safety conditions in the robot cell layout, They help in avoiding the physical injuries and other damages caused to the human workers .

In the robot work cell, the series of activities of various equipments are controlled by using the interlocks, The sensors are used to verify the conclusion of the current work cycle before progressing to the next cycle.

The sensors are used in data collection of objects in the robot work cell to determine the position or other related data about the fixtures, the work parts, the equipment, the human workers and so on, Apart from sensing the position, It is implemented to find out the other information like the work part’s color, the orientation, the size, the shape, etc.

The image quality is important in the applications which require excellent robotic vision, Algorithm based on the wavelet transform for fusing the images of different spectra and different foci improves the image quality, The robots can collect more accurate information from the resulting improved image .

The robots use touch signals to map the profile of the surface in hostile environment such as the water pipe, The predetermined path was programmed into the robot, with the integration of touch sensors, The robots first acquire the random data point .

The automated robots require the guidance system to determine the path to perform its task, the only way to achieve motion in such environment is to replace the sensors with the chemical reactions .