The robot software is used to perform autonomous tasks , It is the set of coded commands or instructions that tell the mechanical device & the electronic system , known together as a robot , what tasks to perform , Many software systems & frameworks have been proposed to make programming robots easier .

The robot software is able to develop the intelligent mechanical devices , The most common tasks include feedback loops , control , path-finding , data filtering , locating & sharing the data , Although many softwares are about manipulation of the data & seeing the result on screen , The robot software is for the manipulation of the objects or the tools in the real world .

Industrial robot software consists of the data objects & the lists of instructions , known as the program flow ( list of instructions ) , The data & program reside in separate sections of the robot controller memory , You can change the data without changing the program & vice versa , The robot software can create the robotic applications that help or entertain the people , The applications contain command-and-control & tasking software .

You can learn autonomous robot control theory , It helps you to build a simulator that allows you to practice control theory on a simple mobile robot , The robot can guess the state of the real world based on the measurements returned by its sensors , It can change the state of the real world through the application of its control signals , Every robot comes with different capabilities & control concerns . 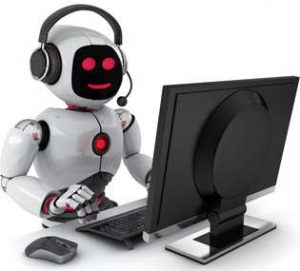 So , one of the first steps in control design is to come up with an abstraction of the real world , known as a model , with which to interpret the sensor readings & make the decisions , The robot may be an autonomous mobile robot , So , it will move around in space freely & it will be done under its own control , This is in contrast to , an RC robot (which is not autonomous) or a factory robot arm (which is not mobile) .

There are many different ways the robot may be equipped to monitor its environment , These can contain anything from the proximity sensors , the light sensors , the bumpers , the cameras , and so forth , The robots may communicate with the external sensors that give it the information the robot itself cannot directly observe .

The roboticists should develop the Programming Mindset rather than to be proficient in one specific language , it doesn’t really matter which programming language you learn first , Each language develops your proficiency with the programming mindset & makes it easier to learn any new language , Programming your robot is the final step involved in building the robot , When you have chosen the actuators , the electronics , the sensors & more .

As the language has much more functionality , So , You’ll use C++ more than C , C++ is an extension of C , It can be useful to learn at least a little bit of C first , so , you can know it when you find the hardware library written in C , C/C++ are not as simple to use such as Python or MATLAB .

It can take a lot longer to implement the same functionality using C & it will require many more lines of code , Although , as the robotics is very dependent on the real time performance , C and C++ are the closest thing that the roboticists have to be a standard language .

The most important thing is to find the language that feels natural for you and fits with your robotic hardware , You want a language that enables you to develop the programs quickly & easily , so that you can focus more on developing functionality , So , You have to learn Python first .

Python is a superb straightforward language to learn & hugely powerful thanks to the many , easily accessible libraries , You can produce usable code in Python as fast as you can type , After you have gotten reasonably proficient using Python language , You have to learn C , followed by C++ , You will need it to interface with a huge majority of robotic hardware drivers .

Python (and C++) are the two main programming languages found in ROS , such as Java , There is a huge resurgence of Python in the recent years especially in the robotics , it is an interpretive language , the prime focus of the language is ease of use , Unlike Java , Python dispenses with a lot of usual things which take up the time in programming , such as defining & casting variable types .

We can see a lot more Python in the robotics , Python enables simple bindings with C/C++ code , The performance of heavy parts of the code can be implemented in these languages to avoid the performance loss , many electronics support Python out-of-the-box .

Some computer science degrees teach Java to the students as their first programming language , Java hides the underlying memory functionality from the programmer , that makes it easier to program than , say , C , but this means that you have less of an understanding of what it is actually doing with your code .

When you come to the robotics from the computer science background ( and many people do , especially in the research) you will probably have learned Java , Like C# & MATLAB , Java is an interpretive language , that means that it is not compiled into the machine code .

The Java Virtual Machine interprets the instructions at run-time , The theory for using Java is that you can use the same code on many different machines , thanks to the Java Virtual Machine , this doesn’t always work out and can cause the code to run slowly , Although , Java is quite popular in some parts of the robotics , so , you may need it .

C# is a proprietary programming language offered by Microsoft , C#/.NET is included largely because of the Microsoft Robotics Developer Studio , that uses it as its primary language , If you are going to use this system , you’re going to have to use C# , However , learning C/C++ first might be a good option for long term development of your coding skills , .NET/C# is used to develop the applications in Visual Studio .

There is a very popular Robotics Toolbox for MATLAB , Some people have developed the entire robotics systems using MATLAB alone , If you want to analyze data , produce advanced graphs or implement control systems , you will want to learn MATLAB , MATLAB & its open source relatives such as Octave , is very popular with some robotic engineers for analyzing the data & developing the control systems .

Assembly language is one step away from the machine code but it is very tedious to use , Assembly should only be used when you need absolute instruction-level control of your code , Assembly helps you program at the level of ones & zeros , This is a programming at the lowest level (more or less) .

In the recent past , Many low level electronics required programming in Assembly , With the rise of Arduino & the others such the micro-controllers , you can program easily at this level using C/C++ , So , Assembly is going to become less necessary for most roboticists .

BASIC was designed for the beginners , It stands for Beginners All-Purpose Symbolic Instruction Code , that makes it a pretty simple language to start with , Pascal language introduces the constructs such as the pointers , that makes it a good stepping stone from BASIC to a more involved language & it was designed to encourage good programming practices .

These days , both languages are a bit outdated to be good for everyday use , However , it can be useful to learn them if you are going to do a lot of low level coding or you want to become familiar with the other industrial robot languages  .

Nearly every robot manufacturer has developed their own proprietary robot programming language , that has been one of the problems in the industrial robotics , You can become familiar with several of them by learning Pascal , Although , you are still going to have to learn a new language every time you start using a new robot .

LISP is not as widely used as many of the other programming languages , It is the world’s second oldest programming language ( FORTRAN is older , but only by one year ) , It is still quite important within Artificial Intelligence programming , Parts of ROS are written in LISP , although you don’t need to know it to use ROS .

The programming options such as ROS Industrial have started to offer more standardized options for the programmers , Although , if you are a technician , you are more likely to have to use the manufacturer’s language .

Hardware Description Languages are used to program Field Programmable Gate Arrays (FPGAs) , So , They are quite familiar to some roboticists , FPGAs allow you to develop the electronic hardware without having to produce the silicon chip , that makes them a quicker & easier option for some developments , These languages are a programming way of describing the electronics .

You may never use HDLs , If you don’t prototype the electronics , so , You should know that they exist , as they are different from the other programming languages , all the operations are carried out in parallel , rather than sequentially as with the processor based languages .

Processing (Arduino) is a variant of C++ which contains some simplifications to make the programming  easier , Python is one of the most popular scripting languages , It is very simple to learn and it can be used to put the programs together very fast & efficiently .

The programming languages in the industrial robotics are designed for building the data structures & algorithms from scratch , while scripting languages are intended more for connecting or gluing the instructions & components together .

All robotic applications need parallelism and event-based programming , Parallelism is where the robot does two or more things at the same time , This requires appropriate hardware and software .

Many programming languages depend on the threads or complex abstraction classes to handle parallelism & the complexity that comes with it , like concurrent access to shared the resources , URBI offers a higher level of abstraction by integrating parallelism and the events in the core of the language semantics .

You can create manageable chunks of functional code , By creating the segments of code specific to each product , you gradually build up the library , Develop the file system on your computer to easily look up the necessary code .

You have to document everything within the code using the comments , Documenting everything is necessary in all jobs , especially the robotics , As you become more & more advanced , you may add the comments to general sections of code , though as you start , you should add the comment to (almost) every line .

You have to save different versions of the code , do not always overwrite the same file , if you find that your 200+ lines of code do not compile , you won’t be stuck going through it line by line , but you can revert to a previously saved (and functional) version & add / modify it as needed , Code does not take up much space on the hard drive , so , you should not feel pressured to only save few copies .

It is unsafe for the human to remain in the work area of the robot during the automatic operation because of the mass & high-speeds of industrial robots , The system can begin motion at unexpected times & a human will be unable to react quickly enough in many situations , even if prepared to do so .

So , if the software is free of programming errors , great care must be taken to make an industrial robot safe for human workers or human interaction , such as loading or unloading parts , clearing the part jam , or performing maintenance .