Flying Car is the airplane that can drive, It has a lightweight, It comes with collapsible wings, and efficient design make it precision & tuned for flight, using a flying car would offer less traffic on the ground for normal car drivers & it would require shorter transit times, Flying cars are also a popular theme in fantasy & science fiction stories.

The flying car is a type of personal air vehicle or roadable aircraft that offers door-to-door transportation by both ground & air, The term flying car is sometimes used to include hovercars, The idea of the flying car seems creative, combining the advantages of planes & cars, The flying car requires much smaller parking space than the plane & it is more convenient than the car, especially when it comes to maneuvering traffic jams.

Flying cars run on a minimal amount of fuel hence they are quite-fuel efficient, You will never have to deal with traffic jams when you fly on the flying car, 100 percent of automated cars make them easy to use, Some cars involve wireless systems and fully fledged GPS satellite connection too, Humans have problems with the aspect of driving in two dimensions, this problem might be solved via the use of self-flying & self-driving cars.

Roadable flying cars will be able to fly in the air & run on roads, flying cars have reached the market such as the X-M2, M200X, and M400, They are developed & manufactured by the Canadian genius Paul Moller, These Flying Cars work with the help of petrol, diesel, kerosene & alcohol too and the essential component that makes this car functional is propane, The fuel efficiency that is brought by these cars can be compared to that of a medium sized normal car. 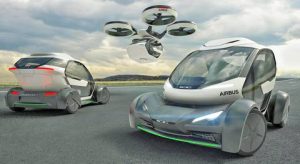 Flying cars can morph into planes and vice versa, The navigation support that will be stipulated by this car is controlled by GPS satellites along with cellular services, So, the driver should get into the car, and switch on the power after that enter the phone number or address of the destination, the rest of the work is done by the flying car itself.

The idea of a flying car depends on a completely automatic system that can be utilized by almost anyone, Even those who hardly know anything about driving the car or plane can drive it as well, There are a few output devices installed in the car that can be used to operate any type of command to the car, The fully automated car will help you to get to your destination in no time.

Two types of flying cars have been developed, The first is the fixed-wing flying car, It is more like the small plane with collapsible wings, which can fly to avoid traffic jams and travel on the road when approaching the destination, It has a quite long flying range, from 500 kilometers to 600 km.

The other flying car is rotor-wing flying car, It looks like a small helicopter, It has two rotor wings, one on the top and the other at the back, which help it to fly, The wings can be folded on landing and the vehicle can be driven on the road, it needs a narrower lane and a smaller stretch of road for takeoff and landing, but its flying range is only about 200 km.

The flying car requires the person at the controls to be both a qualified road driver & aircraft pilot, so, wider adoption will require computer systems to re-skill piloting, These include the aircraft maneuvering, navigation & emergency procedures, all in potentially crowded airspace.

Fly-by-wire computers can make up for many deficiencies in flight dynamics, such as stability, The mechanism that is used in the making of these cars is quite complex, The practical flying car may need to be a fully autonomous vehicle in which people are present only as passengers.

Flying is safer than driving, There will be new rules, additional driving & flying education, Flying car should be capable of safe, reliable and environmentally-friendly operation both on public roads and in the air, it can fly without a qualified pilot at the controls and it should come with an affordable purchase and running costs.

The technologies used to design & manufacture flying cars have matured, and their safety can be guaranteed, The problem is that there is no universal technological standard for flying cars, flying cars are defined as small, light airplanes, so they need to meet the technical standards of both cars and airplanes, Flying cars are too costly than the usual cars, They would be costly to build and maintain.

Flying cars need fossil fuels that the people continue to complain about due to the high financial & environmental costs, Buying both regular fuel plus kerosene plane fuel would be way more costly, Being able to drive the flying car takes little education, So, flying the sky car would take much more effort & time to learn.

Unlike commercial planes, personal flying cars might not have as many safety checks and their pilots would not be as well trained, The motors and structures of cars & airplanes are built on different principles, aerodynamic designing is expensive, So, the cost of flying cars will be very high, So, there is little possibility of flying cars becoming popular among consumers.

Many devices should be used to monitor road safety, flight routes of flying cars have to be installed before using these machines, laws forbid car owners from modifying their vehicles without official permission, flying cars are different from ordinary cars in design, speed and the nature of their engines and accessories, So, it will be a big challenge for lawmakers to include them in the legal standards for vehicles.

In mid-air collisions and mechanical failures, the aircraft could fall from the sky or go through an emergency landing, resulting in deaths and property damage occurs due to poor weather conditions, A major problem is the risk of mid-air collisions, Another is the unscheduled or emergency landing of the flying car on an unprepared location beneath, including the possibility of accident debris.

The practical flying car must be both strong enough to pass road safety standards and light enough to fly, The flying car must operate safely within a heavily populated environment, The lift and propulsion systems should be quiet, and have safety shrouds around all moving parts, and it should not create excessive pollution.

If the people face inclement weather conditions and fail to control the car in the air, they are more likely to crash, If the people use flying cars then traffic on the ground would decrease but the air traffic would become a more potentially dangerous problem, There would be more rules for flying cars, more strict rules to be exact, You can’t pull up at the nearest cloud when you run out of fuel.

Flying cars can’t be made a safe method of transport, The people may talk on the phone, read magazines, When using flying cars in the air, So, Accident rates would drastically increase and when the flying car crashes into another, they wouldn’t survive that easily, They would fall to the ground killing pedestrians or the other people compounding the devastation of accident.

The airplanes are directed by the air traffic control, They are given explicit instructions when to take off, where to fly, and how to land but if too many people use flying cars, it would be nearly impossible to control who lands, when and where, and it would be chaos.