The energy conversion or the energy transformation is the process of changing one form of energy to another, the energy produces certain changes within a system, Changes in the total energy of systems can only be accomplished by adding or removing the energy from them as the energy is a quantity which is conserved (unchanging).

Energy conversion in the cars

The energy in many of its forms may be used in natural processes, It provides some services to society such as heating, refrigeration & light, it performs mechanical work to operate the machines.

The internal combustion engine in the car converts the potential chemical energy in gasoline and oxygen into thermal energy which is transformed into the mechanical energy that accelerates the vehicle (increasing its kinetic energy) by causing the pressure and performing the work on the pistons.

There is useful energy transfer in the car engine, You can see that the car engine transfers the chemical energy which is stored in the fuel into the kinetic energy of expanding gas via combustion in the engine and the wheels. 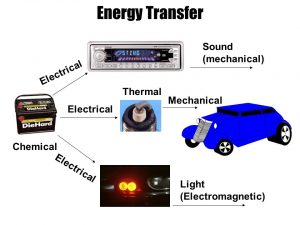 Energy transformation inside the cars

The heat energy changes into mechanical energy which moves the car and the chemical energy that is stored in the fuel changes by burning into the thermal (the heat) energy in the car engine.

The car has much energy that is stored in its battery when the car moves, It converts some of this stored electrical energy into kinetic energy, It is completely internal in the car, There is not energy that transferred across the car or the road boundary.

You can’t store the momentum in a battery, Any onboard momentum would necessarily show up as the motion of the system’s center of mass, So, any change in the momentum of a system simply must be due to a transfer across the boundary of the system.

Law of Conservation of mechanical energy in everyday life