It is the vehicle which operates while in contact with the ground and without the onboard human presence ,  It can be used for many applications where it may be inconvenient , dangerous or impossible to have the human operator present , There are two classes of unmanned ground vehicles which are Remote-Operated UGV and Autonomous .

UGV will have a set of sensors to observe the environment , It will either autonomously make the decisions about its behavior or pass the information to the human operator at a different location who will control the vehicle , There are two types which are usable by the riders or only for cargo .

Unmanned robotics are the land-based counterpart to the unmanned aerial vehicles and the remotely operated underwater vehicles , They are being actively developed for both the civilian and the military use to perform a variety of the dull , dirty and dangerous activities .

The remote-operated UGV is the vehicle that is controlled by the human operator via the interface , It can control all the actions of the operator by the direct visual observation or the remote use of sensors & digital video cameras . 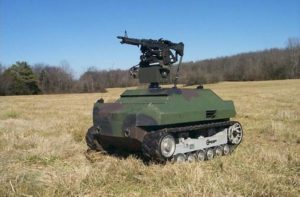 Remote-operated UGVs are used to replace the humans in hazardous situations such as the explosives and bomb disabling vehicles ,  They are being used in Japan repairing the nuclear reactors that are still emitting too much radiation to warrant the human presence .

UGVs are being developed for the peacekeeping operations, the ground surveillance, the gatekeeper/checkpoint operations, urban street presence and to enhance the police & military raids in the urban settings, They can reduce the military & police casualties, They are used in the rescue and recovery missions .

UGV is the autonomous robot that operates without the need for the human controller, It uses its sensors to determine the next action to take in the context of the human provided mission goal, It can disarm or remove the explosives and it can repair itself without outside assistance.

The fully autonomous robot can collect the information about the environment such as building maps of building interiors , It can detect the objects of interest such as the people and the vehicles , It can travel between the way-points without the human navigation assistance .

Autonomous robot can work for extended durations without the human intervention , It can avoid the situations which are harmful to the people, property or itself , unless those are part of its design & specifications .

The technology programmed into the unmanned robotics then it allows the soldier to spot out the enemies on the patrol or waiting to ambush our soldiers , It can help save the lives , Unmanned robotics can stop out the enemy snipers in the area which is one of the deadliest weapons used in any form of the warfare .

Unmanned ground vehicles have allowed the troops to peek around the corners and investigate suspected bombs , They can discover many explosives , The military can send unmanned robotics to examine the terrain , If the bomb is found and can not successfully defuse the bomb , UGVs can be used to detonate the explosive .

Unmanned ground vehicles help the soldiers eliminate any dangerous opposition in their way , But these unmanned vehicles can also help the military in the firefights and live combat situations , They are used to bring the supplies to the soldiers in the combat and they help the soldiers to have the surplus of ammo .

The unmanned military vehicles can spot the explosives or the human opposition before the soldiers can be harmed in the combat , They can save the human soldier from the harms and they are considered superior fighting machines .

One of the most popular errors with the remote controlled UGV is the lagging of it ,  and during this time the UGV is capable of moving to far to the left , leaving it to fall of the cliff , It can be detected by the enemy troops , or even be blown up by a mine .

Bandwidth always be the problem with the wireless solutions and even some wired solutions , causing for the slow reaction time for the controller to the actual UGV , bandwidth will remain an issue because it is shared with many other UGVs .

UGVs are not a reliable as the human , many of these vehicles are stealthy vehicles that are not capable of detecting where the enemy soldiers are , and even developing the detailed description of the enemy household and the autonomous robots still require regular maintenance as all machines .

UGVs are likely to over heat in many situations , and once they overheat they are stuck in that same position until the vehicle is cooled down , So , if the UGV gets stuck in the enemy house it blows its cover of being a stealthy soldier and warns the enemy that these soldiers are coming in for an attack .

If the UGV is used to clear the mine field , but it breaks down during its operation , The soldier would have to come to aid this vehicle and try and fix it , which leaves this soldier open to the enemy surprise attack , The enemy can spot the disabled military vehicle & prepare for battle , This eliminates the element of surprise for the soldiers .

Although these robots are not fully autonomous and they don’t make the decision whether to shoot and kill the enemy combatant itself , It is still violating these ethical codes because it is an unmanned vehicle , It is a disadvantage because many people around the world are trying take away these unmanned vehicles because they violate these codes .

Unmanned military ground vehicles are expensive , The big disadvantage is the cost at which these vehicles bring in our military , Each unmanned weapon requires its own specific programming , They require many engineers to spend countless hours on testing and designing them , They can be destroyed before they have benefited any of our soldiers .

UGVs have some technological problems that can happen to the robot during the wartime situation and they become useless , This would give the dramatic increase in the possibility of the soldiers being injured or killed by the enemy , UGVs can be used for our military forces to see the portion of the environment and they can be used against our military if there is the technological errors .