Robot soldiers are autonomous robots or remote-controlled mobile robots designed for military applications, from transport to search & rescue and attack. Military robots can be built and programmed to do a certain task and will do it better than how a human would do it. Military robots can make the difference between a winning war and a losing war, Military robots can include different types of weapons and are more efficient than a human controlling these weapons.

Military robots can do the most dangerous tasks instead of the soldiers, If there were something wrong, we would only lose the money of the robots instead of losing the soldier’s life.

Military robots do not get tired, they do not need to sleep, they do not know fear, they are teleoperated and not equipped with weapons, and they are used for surveillance, and sniper detection and they can neutralize explosive devices.

Military robots include cameras, video screens, force sensors, and special grippers, they can do risky jobs with these integrated systems, and they have different shapes according to the purposes of each robot. 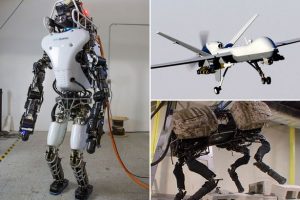 Military robots’ job is the assistant of the soldier, they can help to make human life easier, and they help to save them from risks in dangerous areas.

Military robots can perform duties similar to human duties without the actual danger to human lives, they can endure the damage done by bombs or other types of weaponry that would destroy the human body.

Military robots can be used not only to disarm bombs and weapons but to hold and fire, They are also equipped with machine gun-like features which make these medium-sized robots appear to be small armies.

The military gave the robots jobs that are dirty, dangerous, and boring as Bomb disposal which can expose human life to death as losing the robots is better than losing human life.

Robots can replace soldiers in dangerous missions such as crawling through caves or in the streets during wars, they can reduce the casualties.

Military robots can reduce civilian casualties, they can make faster decisions than humans, and they can not feel anger, revenge, hunger, fear, fatigue, or stress.

Military robots can use video or other sensors to monitor the human soldiers on both sides of a battle for violations of the laws of war, They have been used for reconnaissance and direct warfare.

Army robots come in different shapes and sizes depending on the requirement, they may be remotely controlled or fully autonomous,  Intelligence, Surveillance, and Reconnaissance (ISR) can use military satellites, UAVs, UGVs, USVs, ROVs, AUVs, and others are extensively used in the ISR application.

Armed forces use small robots, which can remain almost invisible to the enemy, Robots help monitor enemy forces or specific areas and send videos and images to the ground station with the assistance of GPS.

Rescue Robots are used in the military, and they can play a crucial role in saving lives, The majority of casualties happen due to the delay in offering necessary aid to victims, Rescue robots are highly advantageous in war, They can search, track, and rescue in nuclear, biological, radiological, and chemical environments, They can be operated remotely by soldiers from a command center, and they can work autonomously.

Explosive Ordnance Disposal (EOD) robots can identify and disarm traps, fireworks, improvised explosive devices, and other dangerous objects in closed areas, buildings, and vehicles, They are integrated into bomb detection systems, They can carry a variety of payloads depending on the EOD mission.

Firefighting robots are used to address fire situations to avoid casualties, Fire fighting robots can detect fire, implement a broad range of fire-suppressing techniques, withstand high temperatures for longer periods, and respond to different types of movements, Fire fighting robots can detect fire, as they are equipped with a suite of cameras, a gas sensor, and a stereo infrared camera, which help these robots find their way through the smoke and bring the fire under control.

Risks of artificial intelligence in military

Military robots sometimes carry out unethical or illegal commands, Human rights groups and NGOs such as Human Rights Watch and the Campaign to Stop Killer Robots started urging governments and the United Nations to issue policies to outlaw the development of so-called “lethal autonomous weapons systems”.

Setting up AI machines, and computers comes with huge costs, repair and maintenance run into thousands of dollars. AI machines are more efficient than humans but machines can’t replace humans, But it is impossible to replace humans with AI.