Robotic surgical systems can be used for diverse procedures ranging from cholecystectomy to hysterectomy to distal pancreatectomy to prostatectomy, The robotic surgical system offers three-dimensional visualization with an improved camera image and has a precise range of motion, features that help to reduce the risk of gastric or bowel perforation during robotic procedures.

Robotic surgery is equipped with multi-articulated instruments that allow for precise intrabdominal movements, robot-assisted surgery is suitable for procedures that require extensive intracorporeal suturing and knot tying, tasks that can cause the surgeon to get fatigued. Surgeons can perform the surgery using a robot called the da Vinci Robotic System.

The da Vinci System consists of the ergonomic console unit that includes a display system, the surgeon’s user interface and the controller, and a second unit that includes the endo‐wristed instruments and the endoscopic camera that execute the tasks as the “slave manipulator.” There are several benefits to robotic surgery: such as the lower risk of infection, less blood loss (fewer transfusions), shorter hospital stays, less scarring due to smaller incisions, and often offer better short-term surgical outcomes.

In robotic surgery, the complication rate and length of stay were comparable to conventional laparoscopy, although operative time was longer in the robot-assisted group, the robotic-assisted surgery can manipulate the articulating instruments in a small working area. Robotic surgery offers a better range of motion. 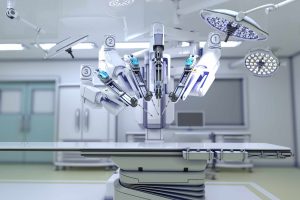 The liver is the accessory digestive gland located in the right upper quadrant of the abdomen, The liver produces bile that aids in the emulsification and digestion of dietary fat, The liver serves many other critical functions including metabolism of drugs and toxins, removing degradation products of normal body metabolism and synthesis of many important proteins (e.g. clotting factors) and enzymes.

Minimally invasive liver resection surgery can be further enhanced with the use of advanced technologies such as the robotic da Vinci® Surgical System. so, many procedures that would require a large incision can be performed through a few small incisions.

Robot-assisted technology was developed to address the limitations of conventional laparoscopy, The robotic articulating laparoscopic instruments recreate the seven degrees of freedom of the human hand, Robotic liver resection surgery offers the dexterity & precise movements that are lacking in laparoscopic instruments, The 3-dimensional view, and magnification of the operative field enhance visual perception while complex algorithms minimize physiologic tremor, so, the surgeon can perform delicate tissue dissection & precise intracorporeal suturing.

The advantages of robotic surgery allow for resections of lesions adjacent to major vessels, near the liver hilum, and with generally more complex anatomy, robotic surgery has expanded the scope of surgical procedures that can be performed through minimally invasive techniques, robot-assisted technology should be viewed as an advanced tool to improve the minimally invasive approach for complex procedures.

Robot-assisted liver resection appears to be comparable to its laparoscopic and open counterpart in many regards, including operating room time, estimated blood loss, length of stay, and complications. We found a shorter length of hospital stays, an earlier start of oral feeding, and less pain after robotic surgery compared to open surgery for liver resection.

Surgery is an important part of liver cancer treatment, The liver is a unique organ in that after a damaged section is removed, the remainder can gradually regenerate itself. The liver is tucked away in the upper right quadrant of the abdomen, so, it is not easily accessible through surgery, open liver resection surgery requires a very large abdominal incision that originates under the ribs and extends to the midsection.

The da Vinci Surgical System provides operators with an intuitive translation of the instrument handle to the tip movement, visualization with 3-dimensional images and a stable camera platform, scaling, tremor filtering, coaxial alignment of eyes, hand, and tooltip images, and Endo-Wrist with a 360-degree range of motion, comfortable, ergonomically ideal operating position, and the possibility of remote site surgery.

The da Vinci robotic hepatic resection can open a new horizon of treatment strategies and overcome the limitations of laparoscopic surgery, the use of robots is expected to increase in the treatment of malignant tumors of the liver as minimally invasive surgery.

Although robotic surgery has many limitations: high cost, lack of tactile sense, lack of training systems, heavy robotic arms and equipment, time-consuming setup, and difficulty in converting to open surgery, the da Vinci system is not attached to the operating table, requiring undocking to change table position, When dangerous circumstances such as massive bleeding occur, the assistant can compress bleeding focus with the laparoscopic instruments until conversion to open surgery.

In robotic cardiac surgery, the differences in cost between standard laparoscopic and robotic procedures are largely driven by operating room time rather than the cost of surgical consumables, the robotic approach is associated with longer operative times and a higher cost.