Microwave technology is used for telecommunications, the microwave is easily focused into narrower beams than the radio waves, its higher frequency allows the broad bandwidth and high data transmission rates.

Microwave technology is very useful in communication because it easily penetrates the earth’s atmosphere which comes in handy primarily for space-vehicle communication.

Microwave technology is used in the world’s data, TV, telegraphs, satellites, spacecraft communication, it is also used in the microwave ovens and in radar technology and shorter microwaves are used in remote sensing. 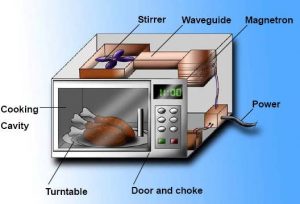 The microwaves are made by various types of transmitter, and they are high-frequency radio waves, we use them to cook many types of food as they cause the water and fat molecules to vibrate, So, they make the substances hot.

Mobile phones use microwaves, they made by a transmitter chip and an antenna, so, mobile phones don’t need to be very big.

Microwaves are used by fixed traffic speed cameras, they are used for the radar that is used by the ships, the aircraft and they are used in the weather forecasts as Doppler radar.

Microwaves are suitable for transmitting the information from one place to another as the microwave energy can penetrate the haze, the light, the rain and the snow, the smoke, and the clouds.

Microwaves are very important in science as the microwaves are used to make a special conductor made of copper called chalcopyrite and they can add in the process of separating chemical compounds, So, the scientists can study each component of the compound.

Microwaves are very useful in medicine as they can be used to treat the health problems better than the drugs, they are used in medical cases as an alternative to the surgery, They can heat enlarged prostates to kill extra tissues and they are safer than the surgery.

Microwaves cause cataracts in the eyes that prevent the eyes from seeing clearly, so, you should not press your face on the microwave oven door to see if the food is ready.

You should not spend a long time on calling on the phone as the microwaves from mobile phones can affect parts of your brain and you should keep short calls.

Microwaves leaking from the oven are very dangerous for the women who are pregnant, because of the unknown defects caused by the radiation leakage.

Microwaves come with unnecessary daily exposure to radiation, they can create severe health issues and they were never researched before adoption.

Microwaves create carcinogenic compounds in certain foods, They destroy the nutrients value of the food,  they are unsafe for baby’s milk and hazardous changes have been found in the blood of individuals consuming microwaved food.