Electric potential difference of a conductor

The electric potential of a conductor is the state of an electric conductor that shows the transfer of electricity to and from it when it is connected to another conductor, It is from the physical properties of the electric current. 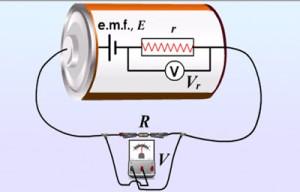 The volt is the potential difference across two terminals of the conductor on doing the work of one joule to transfer the quantity of charge of one coulomb, The joule is the amount of work done by the force of one Newton to move the object through a distance of one meter.

Electromotive force (e.m.f.) is the potential difference between the two poles of the battery when the electric circuit is open (no current passes through the circuit), The measuring unit of the e.m.f. is the Volt.

The voltmeter is connected in the electric circuit in parallel between the poles of the dry cell or the battery to measure the electromotive force (e.m.f.) of the battery in an open circuit.

The electric voltage at home is 220 volt, the big electric appliances such as the washing machines and the dishwashers are relatively high voltages of 110 – 240 volts, but the electronic devices such as the mobile cell phones use relatively tiny voltages.

If you connect the device of low voltage directly at your home that has 220 volts source, that device wil break down, So, You should use a device known as the electric transformer (step-down transformer) to reduce the electric potential of the source.

Ohm’s Law for the closed circuit , Relation between emf ( VB ) of an electric cell & voltage across its poles