The ammeter and measuring the electric current intensity

The electric energy is the cleanest source of energy as it does not pollute the environment, The electricity plays the important role in the daily life , It is used to light up our houses , factories , streets , It is used in operating some machines such as the radios , televisions , washing machines , irons , And the electric heaters , We can not imagine our life without the electric current .

All the elements consists of the atoms which consist of the nucleus and the electrons , The nucleus is found in the center of the atom and it contains two types of particles which are the protons ( positively charges ) and the neutrons ( electrically neutral ) . 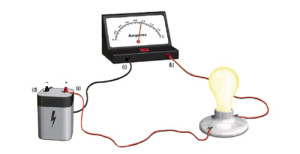 The electric connecting wires are made up of metals characterized by presence of the attraction force between its protons and its electrons , where on connecting these wires with an electric source , an electromotive force is generated and the electrons are pumped in one direction and move in the wire ( conductors ) creating the electric current .

The uncut electric charger device ( uninterruptible power supply ) ( UPS ) , It is used to store the electric energy for a long or short period of time , where , it provides the electric devices with the electric current so as to continue operating when there is no current at home.

Ohm’s Law for the closed circuit , Relation between emf ( VB ) of an electric cell & voltage across its poles