Military explosions cause the harmful effects and the diseases and hence they cause the death, there are many bad effects of wars such as the dead and wounded soldiers and civilians, they destroy the cities and the livelihood.

The nations must stop using the environmental destruction as the weapon of war, the napalm, the cluster bombs and other types of explosives all inflict damage to the environment and still form a hazard from the wars that ended decades ago.

There are many practices like the use of weapons containing the depleted uranium, the placement of AP [anti-personnel] landmines, the bombing of factories and storage facilities and burning of oil refineries have devastating effects on the environment.

The humans have easily ingested the depleted uranium because it turns into the radioactive dust on impact, So, hundreds of thousands of civilians and soldiers have been exposed to a highly toxic and radioactive substance and have suffered from numerous effects.

The biological weapons cause greater threat than the chemical weapons because they may be impossible to reverse the effects of an organism that has been unleashed into the environment. 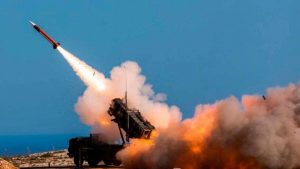 The chemical weapons cause dangerous effects on the human health such as cancer and birth defects, they cause a rapid loss of vegetation that it causes leads to severe soil erosion, they cause a major drop in the species population due to the habitat degradation and high concentrations of dioxin persist in the land, and the ecosystems have suffered from the irreversible damage.

The landmines cause the dangerous injuries, They destroy communities, and they prevent reconstruction, access to safe water and the return of displaced persons to their homes, They also render fertile farmland unusable.

The landmines cause food shortages and malnutrition, They cause the global environmental crises as deforestation, soil erosion, water pollution, and declining biodiversity, and the wildlife and the livestock are a common casualty of landmine explosions.

Nuclear explosions produce both immediate and delayed destructive effects such as the blast and thermal radiation, and the prompt ionizing radiation cause destruction within seconds of a nuclear detonation,  the spread of radiation would affect even larger numbers of people through the destruction of crops and wildlife.

The delayed effects of the nuclear explosions such as the radioactive fallout and other environmental effects, They inflict damage over an extended period ranging from hours to years, They cause the pollution of the seas and the water supplies, and many people far from the site of the nuclear war would die of starvation.

The people have been affected by the increase of radioactive materials in the global ecosystem, cancers, the birth defects, the genetic damage, the lowered immunity to the diseases, these are only some of the potential effects of nuclear testing, uranium mining, the radioactive waste burial and all the phases of nuclear weapons and the nuclear energy production.

What are the bad effects of nuclear weapons?