The nuclear weapon is a device designed to release the energy in the explosive manner as the result of the nuclear fission, the nuclear fusion, or the combination of the two processes and the fission weapons are commonly referred to as the atomic bombs. .

The fusion weapons are also referred to as thermonuclear bombs or, more commonly, hydrogen bombs, they are usually defined as the nuclear weapons in which at least the portion of the energy is released by the nuclear fusion.

The nuclear weapons produce enormous explosive energy, the atomic bomb produces the blast that produced the strong shock wave , enormous a mounts of heat and the lethal ionizing radiation.

The convection currents created by the explosion drew the dust and the other debris into the air, the atomic bomb creates the mushroom-shaped cloud that has become the virtual signature of the nuclear explosion. 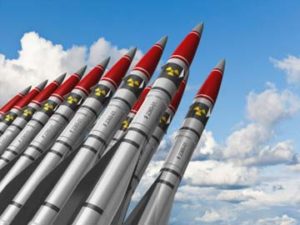 The radioactive debris was carried by the winds high into the atmosphere , later to settle to Earth as the radioactive fallout, enormous toll in the destruction, the death, injury, and the sickness produced by the explosions.

The first nuclear weapons were the bombs delivered by the aircraft, Later, the warheads were developed for the strategic ballistic missiles, They have become the most important nuclear weapons.

The smaller tactical nuclear weapons have been developed, including ones for the artillery projectiles, Land mines, Antisubmarine depth charges, the torpedoes and shorter-range ballistic and the cruise missiles.

Both the reactions release huge quantities of the energy from relatively small amounts of matter, The first test of the fission bomb released the same amount of the energy, The thermonuclear weapon can produce the explosive force and it is comparable to the detonation of more than 1.2 million tons of TNT.

The nuclear explosions produce both the immediate and delayed destructive effects, The blast, the thermal radiation and the prompt ionizing radiation cause the significant destruction within seconds or minutes of the  nuclear detonation. .

The delayed effects of the nuclear weapons such as the radioactive fallout and the other environmental effects, the inflict damage over the extended period ranging from hours to years.

The nuclear weapons are expensive to maintain and build, This leads to the negative effect on the treasury and really harsh political criticism, Only the handful of nations can invest in the nuclear weapons and stay productive and wealthy at the same time.

Isn’t it more honorable to get rid of or reduce the destructive weapons? The presence of nuclear weapons is considered very dangerous and highly immoral, The nuclear weapons comes with plenty of risks, The nuclear experiment effects can linger the decades after the experiments have been completed, This increases the risk to the human life.

The nuclear weapons can accidentally lead to the radiation disaster with the massive reach and if the radiation would go away in an instant, the dangers it poses on the environment and the human kind remain.

You know that the nuclear weapons industry produces a large volume of low-level radioactive waste which is present in the regular items that the people can come in contact with the clothing, the water purifier resin, the hand tools and the materials that used in building the nuclear reactors.

Exposure to the radiation will lead to disability and the cancers and the effect can continue for decades, The residual radiation from the nuclear weapons can destroy the environment and wildlife for centuries, Testing of the nuclear weapons also causes the pollution and the destruction that is why it was banned.