Radiation pollution is the increase in the amount of radiation in the environment. The explosion of the Russian Chernobyl reactor was due to an error in operation. After the Chernobyl accident, radioactive isotopes were found in the food products due to the transference of polluted atomic clouds by the wind, then rain fell and radioactive isotopes transferred to the soil and polluted plants and animals.

The explosion occurred in the Russian reactor at Chernobyl, It occurs in the 26th of April 1986. It occurs as a result of an error in operation, The melting of the reactor core led to a nuclear explosion and the release of many radioactive elements, These elements formed an atomic cloud, This polluted cloud was carried by the wind to many countries in Europe. 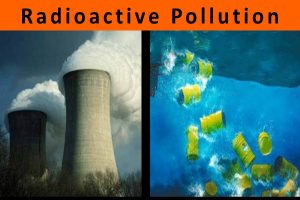 Which radioactive isotopes are found in polluted food…?

The elements that were found in the polluted food after the Chernobyl accident are iodine and cesium isotopes, they are produced from the decay of the nuclear fuel (Uranium-235) when absorbing the neutrons.

The radiation effects on the human body

The effects of radiation on the human body differ in the amount of radiation and duration of exposure to the radiation, These effects can be divided into two groups:

This will lead to the damage of:

Radiation pollution is one of the reasons for leukemia (white blood cells devour red blood cells), Bone marrow is the first which is affected by radiation, When the number of red blood cells decreases in the human body, This will lead to feeling of being sick, Sore throat accompanied by nausea, vertigo, and diarrhea.

The most important effects are:

Radiation has genetic effects because radiation causes changes in the sex chromosomes composition for living organisms.

The international measuring unit of nuclear radiation absorbed by the human body is the Sievert (SV), 1 milli Sievert = 10-3 Sievert.

The safe dose when exposed to nuclear radiation

The safe dose of nuclear radiation:

The safe dose of nuclear radiation depends on:

Means of protection from radiation pollution

1. The workers with radioactive elements in labs and hospitals should wear radiation protective gloves, clothes, and masks.

2. Follow the following precautions, while dealing with radioactive wastes:

3. Burying of nuclear wastes according to the radiation power emitted from it:

4. Issue laws for nuclear stations to cool the hot water before throwing it in seas and lakes.

Some nuclear plants make artificial lakes for themselves to throw their nuclear wastes in them. Nuclear explosions in bombs and atomic reactors cause radioactive contamination that causes serious damage to the environment, with effects lasting hundreds of years.