Army robots can replace soldiers in dangerous missions, such as crawling through caves or in street-to-street urban combat, reducing casualties, Army robots can reduce civilian casualties if used properly and if sufficient ethical programming could be developed, They act as a force multiplier, One human fighter could command a squad of robots working semi-autonomously.

Robots can save soldiers’ lives, they can remove serving soldiers, who might be killed, from the battlefield, they are remote-controlled mobile robots or autonomous robots, they are designed for military applications, from transport to search & rescue and attack, they are not fully autonomous, they require human intervention to ensure that targets are not within restricted fire areas.

More robots are created & used during many missions, Robots come in various sizes, Some robots can fit into spaces that are not easily accessible for humans, Tight, dark spaces are common and robots are a perfect fit for the task, Other benefits include using robots not only to disarm bombs and weapons but to hold and fire.

Robot soldiers are used in fighting wars, many military robots have been developed by many armies, Some believe the future of modern warfare will be fought by automated weapons systems, unmanned aerial vehicle (IAI Pioneer & RQ-1 Predator) is the most prominent system currently in use, it can be armed with air-to-ground missiles and remotely operated from a command center in reconnaissance roles. 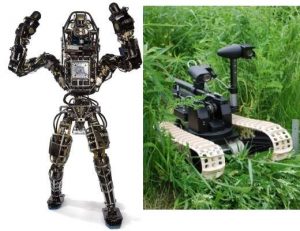 Army robots (Robotic soldiers) will not hesitate to kill any enemy, they have no emotions, so, they can’t be scared or intimidated, they can be sent into places that humans can’t go to such as nuclear waste areas or to extremely hot or cold places, Military Robots can be upgraded instead of being trained, Robot soldiers can be mass produced, Fewer humans will die in war, Robots are sent into the war and serving that role for them.

Army robots can make faster decisions than humans, they are unaffected by anger, revenge, hunger, fear, fatigue, or stress, Military robots can use video or other sensors to monitor human soldiers on both sides of a battle for violations of the laws of war, they refuse to carry out unethical or illegal commands, something a human soldier might be pressured to do.

Military robots are often lifesaving, they can perform duties similar to human duties without the actual danger to human lives, They are easily replaceable at a cost, unlike human life, Robots can endure damage done by bombs or other types of weaponry that would otherwise destroy the human body.

Unmanned Ground Vehicle (UGV) is used on the battlefield for recon & crowd control, they can obtain and terminate any threats that become present, These robots are equipped with a machine gun that makes these medium sized robots appear to be a small army.

Army robots are sophisticated tools that security services can use to deploy extra eyes and ears on the ground, in areas that would otherwise be too difficult, or too expensive, to guard with standard security patrols, They can replace humans in a number of dull, dirty & dangerous tasks.

Robots can see & hear better than humans, they don’t get tired (at least between recharges), they don’t get bored, Army robot comes with an infrared camera to see at night and through fog & smoke, it has directional microphones that detect unusual noises, it has a thermal camera, it has flame or smoke detectors, it has temperature, gas, or radioactivity sensors.

Robot soldier can navigate on his own once he has learned his round, He gets around obstacles, Army robot can analyze the video stream, it can detect anomalies more efficiently than humans, it can read license plates, A security robot with video monitoring can detect an intrusion & announce by means of loudspeakers, or sirens, and it helps keep intruders away.

Military robots reduce risks for humans, they can replace human in difficult, boring or dangerous environments to avoid dangers so that they can’t worry about protecting themselves, Robots can report problems and sound alarms to scare away intruders, and everything will be in the hands of humans.

Artificial soldiers are constantly improving, they reduce the physical risk to security guards, robots can open the field to a greater number of women, Lethal autonomous robots can operate at a tempo faster than humans can possibly achieve and to lethally strike when communications links have been severed.

Robot pilots would not be subject to physiological & mental constraints, Fully autonomous planes could be programmed to take genuinely random and unpredictable action that could confuse an opponent, Bombers & autonomous fighters are used to destroy enemy targets, but there is a lack of training required for robotic pilots, autonomous planes can perform maneuvers that can’t be done with human pilots, the design of the plane does not require a life support system, a loss of the plane does not mean a loss of the pilot.

Autonomy in military weaponry could shift or eliminate humans in decision-making, Full autonomy weapons systems can select and engage targets without further intervention by a human operator, the fatigue, stress, emotion, adrenaline, etc. which affect the human soldier’s rash decisions are removed, there will be no effect on the battlefield caused by the decisions made by the individual.

Military robots can be programmed to ‘shoot second’ with high accuracy, or give an enemy the opportunity to surrender after the enemy has fired his weapon, so, they decrease civilian casualties & increase the chance of capturing enemy combatants, so, they are used for house-to-house clearance operations in modern urban combat, Unlike human soldiers.

Although artificial intelligence and machine learning can make decisions faster and better than a human, they are less prone to cause inadvertent civilian casualties than human-controlled weapons, Robots don’t get tired, They don’t close their eyes, They don’t hide under trees when it rains and they don’t talk to their friends.

Most military robots are teleoperated and not equipped with weapons, they are used for reconnaissance, surveillance, sniper detection, neutralizing explosive devices, etc, Current robots that are equipped with weapons are teleoperated so they are not capable of taking lives autonomously, Advantages regarding the lack of emotion and passion in robotic combat is taken into consideration as a beneficial factor in reducing instances of unethical behavior in wartime.

Army robots could be hacked by the enemy and can be used against you, They can malfunction and turn against you or explode in front of you, they can’t tell right from wrong meaning it could kill civilians as well as rebel allies if it sees them, Robotics can’t accommodate for non-standard conditions, Advances in artificial intelligence in the near future may help to rectify this.

The potential risks of AI could be the worst event in the history of our civilization, It brings dangers, such as powerful autonomous weapons, or new ways for the few to oppress the many, Humans fear robots, Robots could take over the world, and they might take over our jobs, Robots have limited capabilities, despite their capabilities in terms of object recognition and navigation, autonomous robots have zero ability to react to unforeseen events.