The chemical pesticides cause the chemical pollution for the soil, the water & the air, they cause serious health risks such as cancer, the nervous system diseases and the reproductive problems in people who exposed to pesticides through home and garden exposure.

The pesticides are the toxic substances that released into our environment to kill the living things, They kill the weeds, the insects, the fungus, the rodents & others. They can damage the agricultural land by harming the beneficial insect species, the soil microorganisms, and the worms which naturally limit the pest populations and maintain soil health.

The use of chemicals helps to increase productivity but they affect on human health and safety, they can cause many types of cancer in humans such as leukemia, the brain, the bone, the breast, the ovarian, the prostate, the testicular and liver cancers.

The children who live at homes where their parents use the pesticides are twice as likely to develop brain cancer versus those that live in residences in which no pesticides are used, The children can not fight the toxic pesticides into their systems as they have not developed their immune systems, the nervous systems, and detoxifying mechanisms completely. 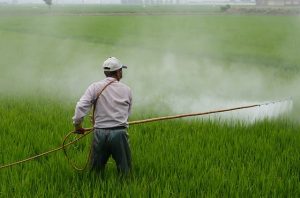 Short exposures to some pesticides may kill or sicken the wildlife, They are toxic to the living organisms, They cause air pollution when they are suspended in the air as the particles are carried by the wind to other areas, They reduce the concentrations of plant nutrients in the soil such as nitrogen and phosphorous, They weaken the plant root systems and the immune systems.

Many bees and butterflies are lost, they are the pollinators that do cross-pollination naturally, they play an important role in the plant cycles and evolution, and the plants that are fertilized using pesticides grow faster.

They are used in farming to control the pests, While all pesticides can harm the humans, the insecticides and the herbicides cause most human poisoning, The chemical pesticides affect the humans by the ingestion, the inhalation & the dermal absorption.

Aflatoxin can cause liver cancers to the humans, it causes lower the body’s normal immune response, and it can impair the growth in the children, The crop protection chemicals are used to control the insect damage that leads to aflatoxin contamination.

The crop protection technologies affect on the cost of food, where without them, the food production would decline, Many fruits and vegetables would be in short supply and the prices would rise.

They are used to control the termites, the roaches, the ants, the rats & other pests, they allow the consumers to have high-quality crops that are free of insect blemishes and insect contamination.

They are used to protect the gardens, the public parks, playing fields, the lakes and the ponds for public enjoyment, Aflatoxins attack the agricultural crops, and the insect control is necessary to prevent its passage from the insect to the plant, and Aflatoxin is a carcinogen.