The camel is an animal that is able to survive well in its surrounding, It is known as the ship of the desert, It is a herbivorous animal that has aided men in crossing vast desert lands with ease because of its remarkable adaptations to the hot and harsh surroundings.

The adaptation in the camel

The camel glides across the desert sand just like the ship and it can stay without food or water for weeks even when it is carrying heavy loads or transporting men.

The camel is an example of all the sorts of adaptation (the structural, the functional, and the behavioural) that helped it to live in the difficult conditions of the desert, So, It is considered as one of the most adapted animals to live in the deserts.

The camel has a plentiful number of lachrymal glands and it has two rows of long eyelashes that protect its eyes from the dispersing sand at the time of the sandstorms. 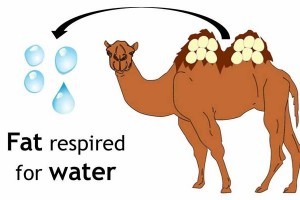 The camel stores the fats.

The camels control the opening and closing of their nostrils to prevent the entrance of the sand particles inside the nose during the sandstorms, The camel has a forked upper lip and strong enamel of its teeth to enable it to eat the spiny and dry desert plants without harming it.

The ears of the camel are small and they are covered from the inside with the dense hair that obstructs the dust and the sand, The legs of the camel end in a broad pad to prevent their diving in the smooth sand and its legs have the thick skin to protect them from the high temperature of the soil.

The body fur thickness of the camel differs in the different body regions to provide protection from the extreme cold at night, It is a little dense over the other regions to ease heat loss by radiation during daylight.

The blood temperature of the camel is not constant as in the other mammals, It changes from 34 degree Celsius in the morning to 41 degree Celsius during the daylight hours, So, The camel has no need for sweating.

The sweat glands of the camel do not start sweating unless the blood temperature reaches 40 degrees Celsius, It stores the fats in its hump to keep it for 3 – 4 months without eating any food and it can drink 100 liters of water for 10 minutes only without affecting its blood composition.

The camels can lose 25 % of their body weight when the water and the food are not available and their blood composition remains constant, This rate exceeds that of the other mammals’ ability by twice nearly.

The camel is a very beneficial animal for the man, It is used in performing a lot of difficult tasks, Man can ride it and uses it for carrying baggage from one place to another, It can carry from 150 to 300 kilograms, It is still used in some army and police forces, The quick and agile camels are also used in the camel races.