The hardness of materials and life applications on it 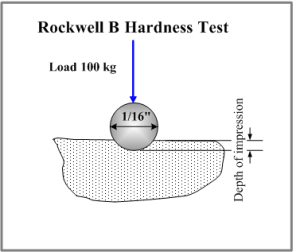 The hardness of materials has been assessed by the materials resistance of cutting, scratching or bending, and it is measured by the resistance which a smooth surface offers to abrasion.

The degree of hardness is determined by observing the comparative ease or difficulty in which one mineral is scratched by another, Hardness is the property of a material that enables it to resist the plastic deformation by penetration.

Hardness is the resistance of a material to deformation, indentation or penetration by drilling, abrasion, impact or scratching, Hardness is measured by hardness tests such as Brinell, Rockwell, Knoop or Vickers tests, and there is no standard hardness scale.

The hardness tests serve an important need in the industry, these tests are based on experiments and observation, They are able to detect certain differences between the materials.

The importance of hardness testing has to do with the relationship between the hardness and other properties of the material, and the hardness test is preferred because it is simple, easy and relatively nondestructive.

The screwdrivers are made of steel iron because it is very hard, and the rods used in building houses concrete are made of iron, not copper because the hardness of iron is more than that of copper.