Chemists use symbols to express elements easily, The symbol of any element is represented by its atom, The atom is the fundamental building unit of matter, It is the smallest individual unit of matter which can share in chemical reactions, matter consists of molecules, molecules consist of atoms, The mass of the atom is concentrated in the nucleus because the electron has a negligible mass relative to that of the proton or neutron.

Chemical symbols of some elements 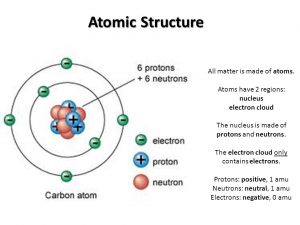 The scientists did many experiments to reach the atomic construction, where they found that the atom consists of Nucleus & Electrons, The nucleus is the central core of the atom, It is positively charged because it contains protons that are positively charged particles, and Neutrons that are electrically neutral particles (uncharged), The mass of the atom is concentrated in the nucleus because the electrons have a negligible mass relative to that of the proton or neutron.

Electrons orbit (revolve around) the nucleus at very high speed, They are negatively charged particles and their number is equal to the number of positive protons in the neutral atom, The electron has a negligible mass relative to that of the proton or neutron.

The atom is electrically neutral in its ordinary state because the number of negative electrons that revolve around the nucleus is equal to the number of positive protons in the nucleus, to express an atom of any element, we use two terms, which are mass number & atomic number.

Atomic number = No. of electrons = No. of protons

Boyle, Dalton, Thomson, Rutherford  & Bohr are from scientists who contributed to the discovery of the atom construction, The atomic radius of an atom is measured in Angstrom, One angstrom equals a part of ten thousands million parts of one metre (10 -10), The radius of hydrogen atom equals 0.3 Angstrom, this indicates how much the atom is small.

Transferring of electrons from one energy level to another

The relation 2n² is not applied to the energy levels higher than four because the atom becomes unstable if the level contains more than 32 electrons, The outermost energy level of any atom can’t take more than 8 electrons except “K” level which is saturated with 2 electrons only.

The electronic configuration & the chemical activity