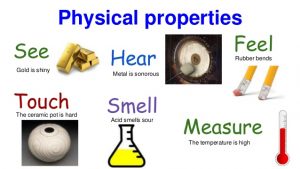 The colour, taste and smell

It is a property that can sometimes be used to differentiate between different materials, You should not taste or smell any substance in the lab, without asking your teacher first because some substances may harm you.

Water is not used to put out (extinguish) petrol fires because the density of petrol is less than that of water, so, petrol floats on the water surface and water doesn’t put out the petrol fires.

Matter exists in three states which are solid, liquid and gaseous, The change of matter from solid-state to liquid state by heating is known as melting, The temperature at which the matter begins to melt is called melting point.

When the boiling point of water = 100°C, this means that water begins to change into water vapour at 100°C, Each substance has a definite boiling point which is used to differentiate between different substances.

Solid substances are divided according to hardness into:

The screwdrivers are made up of steel iron because it is very hard, The rods used in building concrete houses are made up of iron, not copper because the hardness of iron is more than that of copper.

Good conductors of electricity are substances that allow electricity to flow through, Examples: Metals such as iron, silver, copper, aluminum, Some solutions such as acidic solutions, alkaline solutions and some salt solutions.

Bad conductors of electricity are substances that don’t allow electricity to flow through, Examples: Gases, Some solid substances such as sulphaur, phosphorus, wood and plastic, Some solutions such as the solution of hydrogen chloride in benzene & sugary solution.

Good conductors of heat are substances that allow heat to flow through, Examples: Metals such as iron, copper & aluminium.

Bad conductors of heat are substances that don’t allow heat to flow through, Examples: Non-metals such as wood and plastic.

Very active metals are metals which react with oxygen when they are exposed to humid air, so they lose their metallic luster, such as sodium and potassium, Sodium & potassium are kept under kerosene surface to prevent their reaction with the atmospheric oxygen.

Less active metals are metals which react with oxygen if they are left in air for some days forming a layer of rust such as iron, aluminium & copper, Steel bridges & the holders of light bulbs are painted from time to time to protect them from rust & corrosion, Aluminium cooking pans are washed with a rough material to remove the rust layer formed on their surfaces, Metallic spare parts of cars are covered with grease to protect them from rust & corrosion.

Inactive metals are metals which find great difficulty in reacting with oxygen, Examples: Silver, platinium, nickel, gold & chromium, Silver, gold & platinum are used in making jewels because they are chemically poor active, so, they keep their luster for a long time, Nickel, gold & silver are used to cover other substances which rapidly gain rust such as iron to protect them from rust & corrosion.

The importance of good and bad conductors of heat