Examples and some technological applications of electromagnetic waves 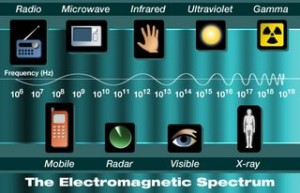 Electromagnetic waves are characterized by:

Ultraviolet (UV) rays: They have the property of killing the microbes, so, they are used to sterilize the sets of surgical operations rooms.

X-rays: They are very important In photographing the bones for detecting the bone fractures, X-rays are used in examining the mineral raws in industry and showing errors, pores and cracks in these minerals.

Gamma rays: They are used for medical purposes as the treatment and discovery of some swellings (tumors).

Also, they are used in cooking food because these rays have heat effect properties and they are used in making remote sets to control and start electric sets (TV, DVD, air conditioner  …. ).

Visible spectrum and Properties of light