A satellite is the moon, planets or a planet orbiting machine or stars. the word “satellite” refers to a machine that was launched into space, and moves around the earth or other planets in space. Some satellites take pictures of other planets, the sun, black holes or faraway galaxies, These images help scientists better understand the solar system and the universe.

Satellites are used for many things such as communication, oceanography, astronomy, the surveillance, They help many scientists get a perceptive view of all kinds of objects anywhere in the world.

Satellites send television signals directly to homes, They send the signals from a central station that generates programming to smaller stations that send the signals locally via the cables or the airwaves, The news broadcasts are sent from the field to the studio via the satellite.

Satellites offer flight phone communications on airplanes, They are the main conduit of voice communication for rural areas and the areas where the phone lines are damaged after a disaster, and they provide the primary timing source for cell phones and pagers. 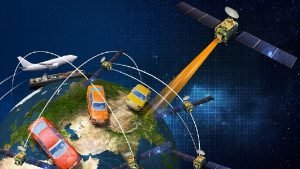 Communications satellites have the ability to rapidly communicate between a number of widely dispersed locations, They help big manufacturing companies and department stores to perform inventory management, and They provide instant credit card authorization and automated teller banking services to even small towns, They pay at the pump gas at the freeway gas stations, and video conferencing for the international corporations.

Astronomy satellites are the new technology that is mounted on earth-orbiting satellites or on deep space probes, and they can give us an unobstructed view without the earth’s atmosphere interfering, They carry detectors to record electromagnetic radiation at wavelengths shorter than visible light.

Satellite-based navigation systems like Navstar Global Positioning Systems enable anyone with a handheld receiver to determine his location to within a few meters, They are known colloquially as GPS.

GPS locators are increasingly included in car direction services, GPS-based systems are used by civilians and the military for navigation on land, sea, and air, and they are crucial in the situations like a ship making a difficult course in a harbor in bad weather or the troops lost in unknown regions.

There are surveillance or spy satellites, There are four kinds of major satellites (White 100) which is the most commonly used, The reconnaissance use cameras to take pictures of a particular place from up above, and they also have radar and infrared detectors, so, they can detect the things in the dark of the things that are covered by something or camouflage.

Reconnaissance satellites are used to spy on other countries, They provide intelligence information on the military activities of foreign countries, They can detect missile launches or nuclear explosions in space.

Reconnaissance satellites can pick up and record radio and radar transmissions while passing over a country and they can be used as an orbital weapon by placing the warheads on a low-orbit satellite to be launched at a ground target.

Ocean surveillance satellites are used to search for ships or submarines, They can spot nuclear vessels, and new advancements may allow them to scan the depths of the ocean, Early warning and Elint satellites are primarily used by the armed forces, These basically protect the countries from the sneak attacks, and they can be used to detect if other countries are building or storing the nuclear warheads.

Elint is the basic spy satellite that picks up radio transmissions, and the maps location of the countries defense bases, It is the most important military satellite because it does not let another country put together an attack without another country knowing.

Satellites provide meteorologists with the ability to see the weather on a global scale, They allow them to follow the effects of phenomena like volcanic eruptions and burning gas and oil fields to the development of large systems like hurricanes.

Satellites are used in the field of oceanography, Now marine scientists and marine biologists can detect everything that goes on in the ocean, They use satellites to detect oceans effect on the environment, they can analyze the wave patterns.

They can monitor the marine surface life, they can analyze the ocean tendencies and the currents, and they can get a complete synoptic view of the ocean, These things help them tell you what the water will be like, and help them find out about the ocean life.

Satellites are the best sources of data for climate change research, They monitor the ocean temperatures and the prevailing currents, The data acquired by the satellite-borne radars were able to show that sea levels have been rising by three mm a year over the last decade.

Imaging satellites can measure the changing sizes of the glaciers which is difficult to do from the ground due to the remoteness and darkness of the polar regions, The satellites can determine the long-term patterns of the rainfall, the vegetation cover, and the emissions of the greenhouse gases.

Earth observation satellites can monitor the ocean and the wind currents, as the extent of forest fires, oil spills, and airborne pollution, This information helps organize the emergency responders and the environmental cleanup.

Satellites can take the search out of search and rescue for people in the distress in remote regions, Distress radio beacons directly linked to a search and rescue satellite can lead the rescuers quickly and accurately to the land, the sea, or the air emergency location.

Remote sensing is observing and measuring our environment from a distance, It is put into space to monitor the resources that are important for humans, It may track animal migration, It can locate mineral deposits, and it can watch the agricultural crops for weather damage.

These satellites can take photographs and observe areas all over the globe, they can monitor the areas in which the climate is very harsh, or which are nearly impossible to reach by land.

Satellites can detect underground water and mineral sources, They can monitor the transfer of nutrients and contaminants from the land into the waterways, and they can measure the land and the water temperatures, the growth of the algae in the seas, and the erosion of the topsoil from the land.

Imaging satellites produce high-resolution data of the entire landmass on earth which are used in the closely guarded military capability, but now anyone with an internet connection can find his house using Google Earth.

Satellites have a clear view of space. Satellites can collect more data, more quickly, than instruments on the ground, Satellites can see into space better than telescopes at Earth’s surface. satellites can be used for communication, such as TV and telephone signals around the world.

Satellites offer a wider bandwidth based on SCPC or MCPC allocation types, they cover a wide area of the earth hence entire country or region can be covered with just one satellite, they co-exist with the terrestrial microwave line of the sight communication system. Satellite services can be interfaced with internet infrastructure to obtain internet service, and it is used as a GPS application.

Satellites have a life which is about 12-15 years, so, another launch has to be planned before it becomes un-operational, satellite manufacturing requires more time, Satellites design and development require a higher cost, when Satellite is launched, it requires to be monitored and controlled on regular periods so that it remains in the orbit.

Redundant components are used in the network design, Which insures more cost in the installation phase, In the case of LEO/MEO, a large number of satellites are needed to cover the radius of earth, satellite visibility from the earth is for a very short duration which requires a fast satellite to satellite handover. This makes the system very complex.

A satellite is wide-area broadcast media as a transmitter antenna may be designed to offer signals to service areas as small as a city or as large as a country.  Once the satellite is in position, the earth station can be installed and communication can be established in days or hours. But terrestrial circuits require time-consuming installations.