The reasons for the occurrence of mirage phenomenon

The mirage can occur on the seas or in the deserts, it is a natural phenomenon that takes place on the desert at noon especially in the summer times, where the objects on the roadsides seem as if they had inverted images on a wet area.

When the air above the desert road is heated at noon which leads to the formation of different air layers of different temperatures by convection currents, and the mirage occurs when the ground heats the air above making it hotter than the air at higher altitudes.

When cold air is denser than warm air, and it has a greater refractive index, when the light travels at a shallow angle along a boundary between the air of different temperatures, the light rays bend towards the colder air.

If the air near the ground is warmer than that higher up, the light ray bends upward, it will totally be reflected above the ground, and the light rays curve downward, and the result is seeing the upright image and the inverted image which appears to you as a reflection in the water. 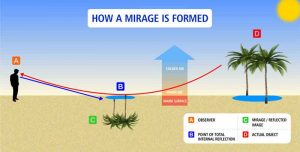 How a mirage is formed

The inferior mirage is usually upside down, it is not stable, when an object (as a tree) exists on the roadside, the rays coming from it refract several times, going from the higher cold layers to the lower hot layers, and the hot-road mirage (fake water) on the road is the most common example of an inferior mirage.

At the hottest air layer (which lies above the Earth surface directly), a total internal reflection happens to the rays coming from the object, So, this layer appears as a watery area and a virtual inverted image is formed below the object.

The heat haze is called the heat shimmer which refers to the inferior mirage that experienced when viewing the objects through a layer of heated air such as viewing the objects across hot asphalt or through the exhaust gases produced by jet engines, and it is called a highway mirage, and the image is usually upside down.

The superior mirage occurs when the air below the line of sight is colder than the air above it, and it is less common than the inferior mirages, it is common in the polar regions over large sheets of ice that have a uniform low temperature.

The superior mirages also occur at more moderate altitudes, and they are weaker and tend to be less smooth and stable, and it can be right-side up or upside down depending on the distance of the true object and the temperature gradient.

The Fata Morgana mirages are most common in the polar regions especially over large sheets of ice with a uniform low temperature, and it can be observed on cold days, in desert areas, over oceans and lakes.

Fata Morgana appears with the alternations of compressed and stretched zones, the erect images, the inverted images, and it is also a fast-changing mirage.

The critical angle and the total internal reflection

What are the causes and uses of the light refraction?