The light reflection takes place when the light rays directed from a source of light to an object reflect from it in the same medium then you can see the reflected light rays to your eyes.

Any incident light ray that falls perpendicular on a reflecting surface, reflects on itself as the angle of incidence and the angle of reflection equals zero. 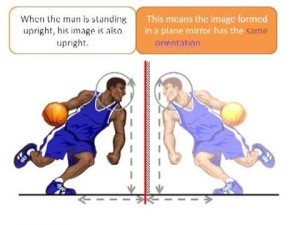 The plane mirror is a piece of plane glass, painted from behind with a thin layer of silver metal to give the glass a bright surface that reflects most of the incident rays on it.

The plane mirror is the mirror with a planer and flat reflective surface, It makes the image of the objects in front of it, The images appear behind the plane at which the mirror lies, The straight line drawn from the part of an object to the part of its image makes a right angle with, and it is bisected by the surface of the plane mirror.

The image formed by the plane mirror is always virtual, upright and of the same shape and size as the object is reflecting, The virtual image is a copy of the object formed at the location from which the light rays come, the image is a laterally inverted mirror image of the object.

The virtual objects produce the real images, however, The focal length of a plane mirror is infinity, Its optical power is zero, The image in the plane mirrors is a virtual image, The virtual images are images that are formed in the locations where the light does not actually reach.

The image is upright (erect), The image is equal to the object in the size, The image is laterally inverted ( reversed ) and the image can not be received on a screen as it is virtual.

The critical angle and the total internal reflection

What are the spherical mirrors?