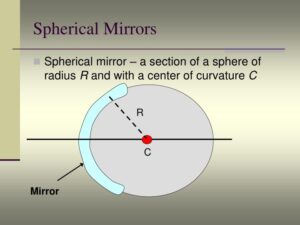 The most commonly occurring examples of convex mirrors are the passenger-side wing mirrors of cars, and they have wider fields of view than the equivalent flat mirrors but the objects that appear in them generally look smaller and, therefore, farther away than they actually are.

The concave mirror (The converting mirror) is a mirror that its reflecting (or shining) surface is a part of the inner surface of the sphere, It converges (collects) the light rays after the reflection.

The convex mirror (the diverging mirror) is a mirror that its reflecting ( or shining ) surface is a part of the outer surface of the sphere, It diverges the light rays after the reflection.

Some concepts related to the spherical mirror

The focus of the mirror (the principal focus) is the point of collection of the reflected light rays (in the concave mirror) or their extensions (in the convex mirror).

The focus of the mirror is produced when a parallel beam of rays is incident parallel to the principal axis of a spherical mirror, It is real in the case of the concave mirror and it is virtual in case of the convex mirror.

The focal length of the mirror is the distance between the mirror focus and the mirror pole, Each spherical mirror has an uncountable number of secondary axes and only one principal axis.

The uses of lenses to treat the vision defects