The concave mirror is a converging mirror that is used for many purposes, It is used as a torch to reflect light, It is used in aircraft landing at the airports to guide the aeroplanes, It is used in shaving to get an enlarged and erect image of the face.

Uses of the concave mirror

The concave mirror is used in front lights of cars to reflect the light, It is used in marine lighthouses that are found at marine ports and at the airports to guide the ships and it is used in solar ovens.

The concave mirror is used in solar ovens and solar furnaces to collect a large amount of solar energy in the focus of the mirror for cooking food, heating water, recharging power backups, or melting metals respectively.

Concave mirrors are used in satellite dishes, They are used in telescopes, and Dentists and ENT doctors use them to obtain a larger image than the original of the teeth, ear, skin, etc. 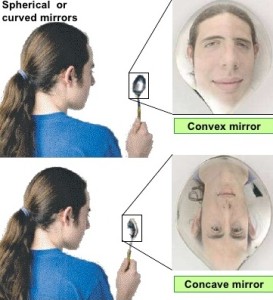 Concave mirror and the convex mirror

The real image is formed as a result of the intersection of the reflected light rays, It can be received on a screen and it is always inverted.

The virtual image is formed as a result of the intersection of the reflected light rays extensions, It can not be received on a screen and it is always erect (upright).

The focus of the concave mirror

The focus of the concave mirror is produced due to the collection of the reflected rays emitted from a far object such as the sun, The rays after being reflected collect in one lit point which is called the focus of the mirror that can be received on the screen.

Cases of formation of the images by the concave mirror

When the object is between the focus and the pole ( at a distance less than the focal length, The image is behind the mirror, The image is virtual, upright ( erect ), and magnified.

When the object is at the focus, No image is formed, The image is at infinity where the rays penetrate as parallel.

Uses of the convex mirror

The convex mirror is used as a side-view mirror on the passenger’s side of a car because it forms an erect and smaller image of the way behind the car.

The convex mirror is suitable for convenience shops and big supermarkets and any other corner that need anti-thief, It is used in turning off the road and parking.

They can be used as street light reflectors because they can spread the light over a bigger area, They are put on the corners of roads so that you can see any cars coming to avoid collisions and they are used as ceiling dome mirrors.

Convex mirrors are spherical mirrors, they give a virtual and erect image, and the image by a convex mirror can’t be captured on a screen, Side-view mirrors in vehicles, driveways, etc use a convex mirror.

Properties of the formed image by the convex mirror

Wherever the position of the object in front of the convex mirror, the image is smaller than the object, It is upright (erect), It is virtual (not received on a screen).

The types and uses of lenses in our life