Anatomy (Greek anatomē, dissection) is the science of the body structure. Clinical anatomy is the study of the body structure in relation to medicine & health problems. All descriptions are based on the assumption that the person is standing upright, with the upper limbs hanging by the sides and the face and the palms of the hands are facing forwards. This is called the Anatomical position.

In humans, An anatomical position is defined as standing up straight with the body at rest. It describes the anatomy of the body so that it is easy to understand what part of the body is being talked about no matter what direction the organism is facing or where its appendages/limbs are. It describes different parts of moving organisms no matter how they are moving or what position they are in. 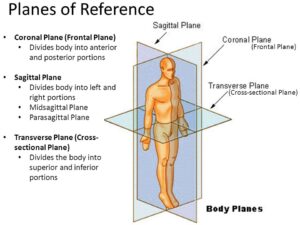 Proximal & distal terms are used only in the limbs

Circumduction is a circular movement which includes the previous movements (flexion, abduction, extension, and adduction). Circumduction occurs in a few joints such as the shoulder and the hip joint. Rotation is the movement around the long axis of the bone.