Lipids are heterogeneous groups of organic compounds related, either actually or potentially to fatty acids, they contain C, H, and O, they may also contain P, N, and S. Lipids play many important roles in maintaining the health of an organism, the most important function of lipids is as building blocks of cellular membranes, Other functions include energy storage, insulation, cellular communication, and protection.

Lipids are a group of macromolecules, they can store energy, signal between cells, and form the cell membrane. They are made from monomers called fatty acids, They are not soluble in water, making them important in cell function. Unlike water, Lipids are non-polar, which means they won’t mix with water.

Lipids are referred to as hydrophobic, which means “water-fearing.” If you mix oil & water, they remain separate because oil is a lipid & non-polar. They have the common property of being:

2- Complex lipids (compound lipids): They are esters of fatty acids with alcohol and in addition, they contain another group (e.g. phosphate, carbohydrate, sulphate, and protein).

Fatty acids are aliphatic monocarboxylic organic acids, they are obtained mostly from the hydrolysis of natural fats and oils. Fatty acids that occur in neutral fats usually contain an even number of carbon atoms, ranging from 2-24 carbon atoms, all of them possess a long hydrocarbon chain and a terminal carboxyl group. 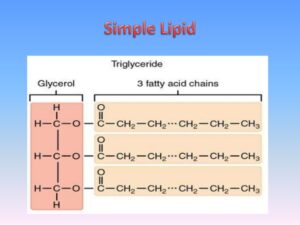 A. According to the chain length of fatty acids they can be:

B. Fatty acids can be classified according to saturation and unsaturation:

1- Saturated fatty acids such as:

2- Unsaturated fatty acids: contain one or more double bonds, they can be classified into:

From the nutritional point of view fatty acids can be classified into: