DNA repair is defined as the cellular responses which are associated with the restoration of the normal base-pair sequence and structure of damaged DNA. DNA repair depends on the cell type, the age of the cell, and the extracellular environment, Normal metabolic activities & environmental factors such as radiation cause DNA damage and can eliminate the cell’s ability to transcribe the gene that the affected DNA encodes.

DNA repair allows the cell to identify & correct damage to the DNA molecules that encode its genome. The best way to illustrate the importance of DNA repair is to consider the effects of unrepaired DNA damage. The most serious outcome is a change in the base sequence of DNA. which, if replicated and transmitted to future cell generations, becomes permanent. A permanent change in the nucleotide sequence of DNA is called a mutation. In mammals, there is a strong correlation between the accumulation of mutations and cancer.

Base excision repair of DNA; The enzyme uracil DNA glycosylase removes the uracil created by the spontaneous deamination of cytosine in the DNA. An endonuclease cuts the backbone near the defect, then, after an endonuclease removes a few bases, the defect is filled in by the action of a repair polymerase and the strand is rejoined by a ligase.

Xeroderma pigmentosum is an autosomal recessive disorder, characterized by extreme sensitivity to sunlight, ulceration and skin cancer. The most common deficiency occurs in the excision endonuclease enzyme. 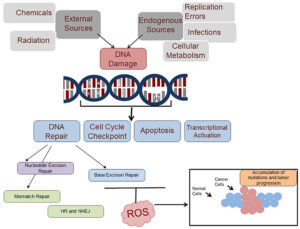 Synthesis of protein under the influence of genes is called gene expression. It includes RNA transcription and protein synthesis (translation).

The coding strand is not used during transcription. It corresponds exactly to the sequence of the primary RNA transcript, except that RNA contains uracil instead of the thymine found in the DNA coding strand. DNA-dependent RNA polymerase elongates an RNA strand by adding ribonucleotide units to the strand 3´-hydroxyl end and builds RNA in the 5´→3´ direction.

The general steps required to synthesize the primary transcript (i.e a newly synthesized RNA) are initiation, elongation, and termination.

RNA polymerase then separates the two strands of DNA as it reads the base sequence of the template strand. Transcription begins at the +1 base pair. (initiation protein factors are released as soon as transcription is initiated).

The first nucleotide (always purine) associates with the initiation site. Except for the first nucleoside triphosphate, subsequent nucleotides are added to the 3´-hydroxyl of the preceding nucleotide forming phosphodiester bond and pyrophosphates are released.

RNA polymerase continues moving along the template strand in the 3´→5´ direction, synthesizing RNA in 5´→3´ direction (elongation protein factors are needed in eukaryotes).

RNA polymerase eventually reaches a transcription termination signal, at that point, it will stop transcription and release the completed RNA molecule (primary transcript).

The cap (7-methyl guanosine) is added to 5´ end while the RNA molecule is still being synthesized. 7-methyl guanosine is joined to the 5´ end of mRNA in an unusual 5´, 5´- triphosphate linkage. All mRNA is capped to be functional in protein biosynthesis.

Significance of the cap structure: serves as a ribosome binding site (for translation initiation). It protects the 5´ end of mRNA from attack by 5´→3´ exonuclease (for mRNA stability.

Poly (A) polymerase enzyme adds poly (A) tail to the 3´ end of mRNA (which is short at first about 20A residues, then subsequently extended to as much as 200 A residues).

Significance of the poly (A) tail: protects the 3´ end of mRNA from 3´→5 exonuclease attack (for mRNA stability). It aids in its transport from the nucleus to the cytoplasm.

Splicing means the removal of introns from the primary transcript in the nucleus and then ligation of exons to form mature functional m RNA. The mature mRNA is then transported to the cytoplasm where it is translated into protein.

Eukaryotic tRNA genes are all transcribed by RNA polymerase III. The primary transcript (pre-tRNA) requires post-transcriptional processing to be mature functional rRNA such as:

Each codon consists of a sequence of nucleotides i.e. it is a triplet code. The collection of these codons makes up the genetic code. Thus, protein biosynthesis is also called translation because it involves the translation of information from the 4-letter language and structure of nucleic acid into the 20-letter language and structure of proteins.

Components of the translational process

mRNA contains 4 different nucleotides (A, G, C, and U). Each amino acid is specified by one or more codons (nucleotide triplets). Thus, there are 4³ codons (i.e. 64 codewords). Three codons (UAA, UAG, UGA) do not specify any amino acid, and function as the stop (termination or non-sense) codons in protein synthesis. The remaining 61 codons code for the 20 amino acids used in protein synthesis. There is one start codon (initiation codon), AUG, coding for methionine (Met). The genetic information along mRNA is read from 5´ to 3´ direction.

Genetic code is degenerate i.e. multiple codons can code for the same amino acid except tryptophan and methionine. The 3rd nucleotide in a codon is less important than the other two in determining the specific amino acid to be incorporated (Wobble theory). Wobble, therefore allows a single tRNA to read (translate) several different codons for the same amino acid.

For example, the two codons for arginine (AGA and AGG) can bind to the same anticodon (UCU). (Note that the direction of reading the anticodon of tRNA is from 3´ to 5´, while reading the genetic code is from 5´ to 3´ direction).

Genetic code is unambiguous i.e. each codon specifies no more than one amino acid. Genetic code is non-overlapping and Commaless i.e. the reading of the genetic code does not involve any overlap of codons, and the message is read in a continuing sequence of nucleotide triplets until a termination sequence is reached. Genetic code is universal i.e. the same code words are used in all organisms (pro-and eukaryotes) with the exception in mitochondria.