The plant has various methods and systems for support to maintain its shape and for its protection, These methods may be physiological or structural, The physiological support is temporary support, because it depends on the presence of the water in the plant cells and there is no support, if this water is lost.

Physiological support affects on the cell itself as a whole. 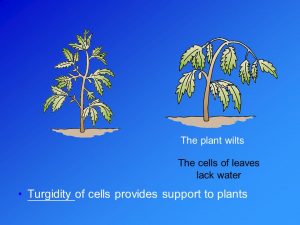 How does it occur?

The water enters the vacuole of the cell by osmosis.

The size and pressure of sap vacuole increase which press in turn on the protoplasm, pushing it to outside towards the wall and that affects on the shape of the cell wall.

The cell wall extends, due to the increase of the pressure acting on it, then the cell swells and becomes with a strained wall to get the support.

Structural support affects on the cell wall or some parts of the cell.

How does it occur?

The deposition of some rigid strong substances on the cell wall or in some of its parts to:

The structural support is a permanent support, because it depends on the deposition of some substances on the plant cell walls or in some of its parts such as cellulose, lignin, suberin and cutin which acquires the plant the turgidity and strength, maintains the internal plant tissues and prevents the loss of the water through them.