Protein is used to build bones, muscles, cartilage, and skin, Hair & nails are comprised mostly of protein, The body uses protein to build & repair tissues. Red blood cells contain a protein that carries oxygen throughout the body, This helps supply your body with the nutrients it needs. It is used in hormone regulation during the transformation & development of cells during puberty. It is used in making enzymes, which helps in food digesting and making new cells.

I. According to shape:

II. According to the biological value:

III. According to structure: 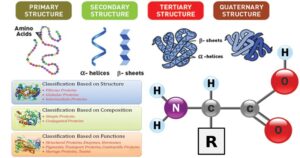 b- Albumin (water-soluble) and globulins, (soluble in dilute salt solutions). These are heat coagulable, globular proteins of high biological value. Globulins have larger molecular weight compared to albumin, they are present mainly in blood plasma, egg white, and milk.

c- Scleroproteins (connective tissue proteins or albuminoids), these are fibrous structural proteins, they are insoluble in most protein solvent. They include:

i. Keratins (epidermal protein) is rich in sulphur containing amino acid (Cysteine), they are the proteins of the outer surface of the skin, hair, and nails. it is an α-helical polypeptide chain.

ii. Collagen is present mainly in the skin, cartilage, tendons, and ligaments, Collagens are the most important proteins in mammals, making up about 25% of the total proteins, there are many different types of collagen, particularly in connective tissue; they form insoluble tensile fibers that occur as structural elements of the extracellular matrix and connective tissue throughout the body.

Their name (which literally means “glue-producers”) is derived from the gelatins that appear as a decomposition product when collagen is boiled, collagen has an unusual amino acid composition. Approximately one-third of the amino acids are glycine (Gly). Collagen is largely present as a triple helix made up of three polypeptides (tropocollagen).

In each of three individual collagen chains (polypeptides) of tropocollagen, the triplet Gly-X-Y is constantly repeated in the sequence i.e., every third amino acid in such sequence is a glycine, with the X position often being occupied by Proline and the Y position by hydroxyproline also hydroxylysine occurs.

In triple helices, every third residue lies on the inside of the molecule, where there is only room for glycine residues (Glycine is the smallest amino acid), the two latter amino acids are only formed during collagen biosynthesis as a result of posttranslational modification, these hydroxylated amino acids are characteristic components of collagen.

The hydroxyproline residues stabilize the triple helix by forming hydrogen bonds between the chains, the strength of collagen comes from these H-bonding between chains. While the hydroxyl groups of hydroxylysine are partly glycosylated with a disaccharide (-Glc-Gal) and help linking tropocollagen molecules together. Numerous tropocollagen aggregate extracellularly into a defined arrangement forming cylindrical fibrils.

Nineteen different collagens are now known and they are distinguished using roman numerals, the various types of collagen consist of different combinations of chains. Types I, Il, and I represent 90% of collagens.

iv. Ossein: The main protein of bone and teeth.