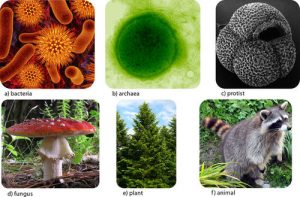 When you pay a visit to the zoo, you may observe the variety among animals in a lot of different characteristics such as the size, the shape, the way of feeding and the environment, where animals live.

The environment, where animals live: Animals live in water such as fishes, crocodiles & hippopotami, Animals live on lands such as horses, dogs & a lion.

Plants are different from each other in many characteristics such as the length, the size of the leaves.

Micro-organisms are living organisms that can’t be seen by the naked eye, but they spread everywhere around us (in air, water & soil), Micro-organisms exist in pond water and can be seen only by the microscope.

Due to the enormous diversity in living organisms species, they must be classified into groups to facilitate their study, the science which is responsible for that is known as Taxonomy, Taxonomy is a branch of biology that searches for the similarities & the differences among living organisms and it places similar ones in groups according to a certain system in order to ease their study.

Plans of classification of living organisms

Classification of plants according to the external shape (appearance) into:

Classification of plants according to their way of reproduction into:

Gymnosperms: their seeds are formed inside cones and not inside a pericarp (fruit envelope) such as pine plant and cycas plant.

Classification of animals according to the nature of body supporting:

Some animals are characterized by the presence of internal support & external support such as aquatic turtle, The body of jellyfish & octopus is soft because their bodies don’t support.

Classification of arthropods according to the number of legs:

Arthropods are invertebrate animals that are characterized by the presence of jointed legs, Arthropods are classified according to the number of legs into:

Spiders & scorpions belong to arachnids because they are arthropods that have four pairs of jointed legs, Scolopendra & Julius are classified as myriapods because they have numerous legs.

Classification of mammals according to the presence of teeth

Edentates (Teethless mammals) such as sloth & armadillo, Mammals having teeth are divided according to the shape, the kind & the number of teeth into:

Sloth & armadillo are classified as edentate animals because they have no teeth, The front teeth of hedgehog are extending outwards to capture insects.

The individuals of the same species differ in some external characteristics because each of them has its specific shape, It is impossible for the cat to mate rabbit because cats & rabbits are from different two species.

The African, European and Asian humans whatever their colour, race or home are also belonging to one species (Human), It is possible to produce a fertile individual from mating of an African man by an Asian woman because both of them are from the same kind.

Although cats differ from each other, they differ more than rabbits and dogs, so, it is impossible for cats to mate with rabbits or rabbits with dogs or dogs with cats if mating occurs, the produced offspring is sterile. Mating can take place between any couple of cats or dogs or rabbits whatever the difference in shape or size and the produced offspring is fertile from the same kind.

So, all cats are placed in one species, while the rabbits are classified in another different species and so dogs, Intercourse may happen between some of the coupled (associated) species, but the product offspring is sterile (barren), Example: The intercourse between a donkey & a horse produces a sterile female called Mule because both are from two different kinds.